Youth worries about mental health and the environment

The young are supposed to be care free but that isn’t the case, many are deeply concerned about mental health, the state of the world’s climate and the persistence of bullying.   This year’s Mission Australia Youth Survey Report 2019 surveyed young people aged between 15 to 19 years old in Australia and found some bright spots too, around six in 10 young people felt very happy/happy. 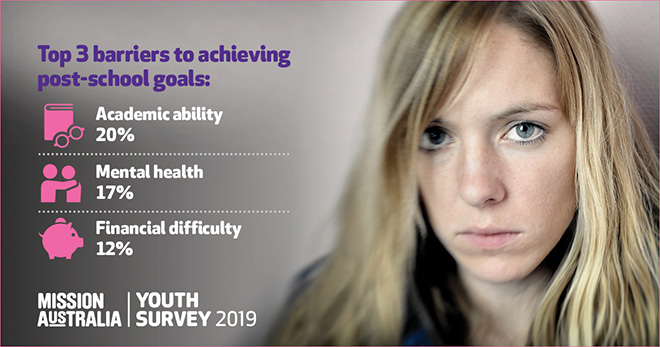 The young are supposed to be care free but that isn’t the case, many are deeply concerned about mental health, the state of the world’s climate and the persistence of bullying

It's not all bad though, The Youth Survey Report indicates around six in 10 young people felt very happy/happy (60.7%) overall with their lives and are very positive/positive (58.3%) about the future.

The majority of young people are engaged in education and confident in their ability to achieve their study and work goals. Most young people report strong family relationships and are involved in a range of activities.

The environment soared from eighth place in 2018 (9.2%) to second place in 2019 (34.2%) of the topics that young people say are important issues in Australia – more than tripling in significance since last year.

Mission Australia CEO James Toomey said: “These results clearly indicate that young people in Australia feel disenfranchised and are deeply concerned about a range of important issues. Feeling ignored is perhaps driving young people to engage in other ways to be heard, such as climate strikes.

“It’s vital that all young people have opportunities and forums available to them so they can speak up and shape public matters and policy. Young people’s concerns must be considered when forming policies that affect their lives and futures. Young people must be part of the design of programs or services for young people. They are, after all, the experts in what it is to be a young person in Australia today.”

Mr Toomey said: “Young people are acutely aware of their own mental health and they can certainly see it is a prevailing issue right across Australia.

“This year, our survey also confirms a disturbing level of bullying which young people are experiencing or witnessing. This is unacceptable. Bullying can cause and exacerbate mental health concerns, with potentially harmful and lasting effects on young people’s lives.

“In light of these findings, it’s clear there is urgent need for better investment in programs and initiatives that promote mental health and wellbeing and combat bullying. A greater focus on prevention and early intervention is also sorely needed. By investing in programs that are proven to work, young people will have a better chance of reaching their potential.”

The 18th annual Youth Survey was completed by more than 25,000 young people.