Swinburne researchers have shown that children can apply the skills they learn on a tablet to the real world. The research shows that when four to six-year-olds learn how to solve a puzzle using a tablet, they then apply this learning to the same puzzle in the physical world. 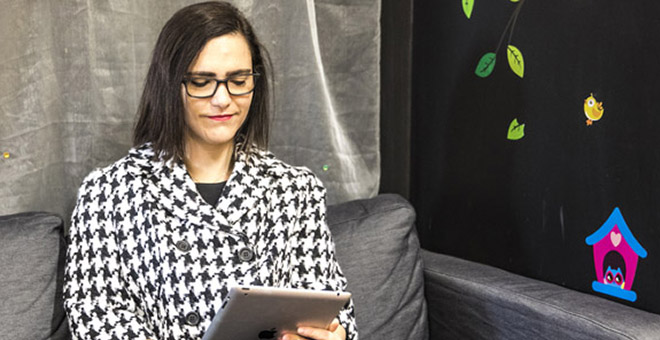 Swinburne researchers have shown that children can apply the skills they learn on a tablet to the real world.The research shows that when four to six-year-olds learn how to solve a puzzle using a tablet, they then apply this learning to the same puzzle in the physical world.

The findings contradict most previous research and suggest that the real world skill learned by a child from a device depends on the actual game played.

"These results demonstrate that 'screen time' is not a useful umbrella phrase, as what children can obtain from different types of screen media will vary, and numerous factors can impact their learning outcomes," says Swinburne researcher Dr Joanne Tarasuik.

In a previous study, Dr Tarasuik and colleagues found that children in Australia could learn how to solve a puzzle on a touchscreen device, and successfully transfer these skills to completing the same puzzle in the physical world.

As this finding was contradictory to most previous research, the team repeated the study with new children with different languages and cultures to confirm it. In the replication study, recently published in Frontiers in Psychology, the Australian team collaborated with researchers in Croatia to repeat their original study.

The study used the 'Tower of Hanoi' puzzle, which involves moving discs between pegs so that they line up in order on a different peg, using the smallest possible number of moves.

The children practised the puzzle on a touchscreen app, or with a physical version using wooden pegs and discs. The researchers measured how many moves they took to complete it, and how long they spent doing it.

Some of the children practised the puzzle several times on the tablet before trying it on the wooden version. This allowed the researchers to see if the kids' virtual practice could improve their skills in the physical world.

The children all needed a similar number of moves to complete the wooden puzzle, regardless of whether they had practised using the virtual puzzle, the physical puzzle, or a combination of the two. From the first to final attempt at the puzzle, all the children also improved their speed.

"We successfully replicated our previous findings that four to six-year-old children can apply knowledge of this puzzle from practice using a touchscreen device, to the physical version of the puzzle," Dr Tarasuik said.

“We would like these results to guide future research into how and what children of different developmental stages can learn via touchscreen technology, and then apply in the physical world."