The metaverse is here and job opportunities abound. 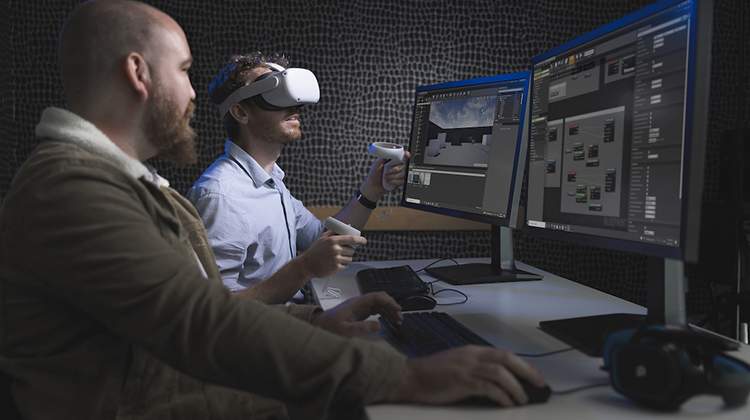 A new frontier opening for employment

Anyone who has tried exploring virtual reality will have found the experience memorable and as the technology matures and becomes more entrenched in workplaces and training there are real career opportunities opening up.

It is estimated there are between 1 million to 3 million people currently employed in the sector, with predictions of 20 million plus jobs in VR by 2030.

Right now, employment in VR space might be at its fringe where Digital Designers, Interaction Designers, and App Developers undertake VR projects due to a skills overlap.

“We are experiencing a natural progression, or perhaps a better term is evolution, of utilising existing skill sets and implementing them into the newest medium, which is common for digital technology. Beyond this, VR is having a noticeable impact in more fields than would be expected, including immersive storytelling, marketing, and location based events (LBEs),” says AR/VR expert, Dr Scott Roberts.

As more skilled professionals become fluent working in the VR space, the hardware itself continues to become more established as it progresses through a production lifecycle. VR technology has been around for decades, but has only recently progressed beyond its infancy, finding applications within a myriad of industries.

Steady increase in demand for VR had been observed leading up to the global pandemic and while there was an initial decline in demand, the pandemic acted as catalyst to push virtual interaction and remote collaboration.

“The opportunities and potential applications provided by VR are universal. If I was to list the industries I know VR is being used effectively, it would be an extensive list! To list a few of the major industries, we are seeing incredible outcomes for digital entertainment in games, rapid prototyping in engineering and construction, teaching methods in primary school classrooms upwards, rehabilitation in health, virtual production in blockbuster movies, collaborative workspaces, and training and simulation across all industries,” says Dr Roberts.

Essentially, there are two main skill sets when working with VR, Design and Development, and there is a need for considerable overlap of skills across both areas. Workers will need a solid understanding of the principles to produce the best possible VR experience and these are adapted from Cinematography, Interaction Design, and UX Design.

“At SAE Creative Media Institute, I teach students from a development perspective on how to be versed in logic. This includes focusing on programming languages like C# and C++, as they are used in Unity and Unreal respectively. Developers hold the key to unlocking functionality and will have the opportunity to incorporate elements of Artificial Intelligence, Machine Learning, and Blockchain.

“On the other hand, Designers will focus on aesthetic and asset production, relying heavily on creativity and design thinking to break boundaries. Aesthetics are defined by longstanding and well-researched 'laws' and 'principles', stemming from other fields such as psychology. Asset production is another wide-ranging field, where you can produce 3D models, animations, 2D graphics, VFX, and even audio assets,” Dr Roberts says.

A grounding in the required technology and skills for a job in VR can be gained in game design and cinematography so formal training and accreditation in those industries would be helpful for people looking to find work in VR.

For those looking to specialise in VR specifically, completing a Diploma or Undergraduate Certificate in Virtual Reality technologies will provide a solid foundation, and particular areas of focus can be defined upon completion.

How the metaverse evolves and how we will be interacting with it is the question on every mogul's lips right now. There are already many metaverses, with Second Life, VR Chat, Viverse and Horizon Worlds (Coming Soon).

“Personally, I’m weary of using ‘metaverse’ for any platform that currently exists as we don’t yet have a digital frontier that is all-inclusive and encapsulating. This should be a fundamental requirement for the metaverse to be defined, as it needs to be for everyone, similar to society today.

“As much as it may be behind-the-scenes and out of the public eye, the race is on to achieve the metaverse by many with the capital resources to do so. A sleight-of-hand is happening, where we are simultaneously being informed the metaverse is decades away, while R & D budgets in the biggest tech companies have grown significantly. Ideally, as the metaverse becomes more attainable, it is managed by multiple independent bodies, instead of the dystopian monopoly predicted in Ready Player One (IOI should be a warning to us all).

“Ultimately, I see a version of the metaverse becoming available by 2030, and it will likely not live up to the initial hype. It never does. However, I’m a fan of ‘finished, not perfect’ as a mantra to get experiences out there for people to use, enjoy, and become a part of the development and evolution over time.

“Initially, we will use the metaverse to boost the activities we currently complete through digital technologies; Social events, meetings, collaborative work, and entertainment (live shows, gaming). As always happens when the greater population is engaged with a product, advertising and sales will be the driving force for evolution and growth once the platform is mature. A recent notable example is NFTs, which will also play a major role in the metaverse,” Dr Roberts says.