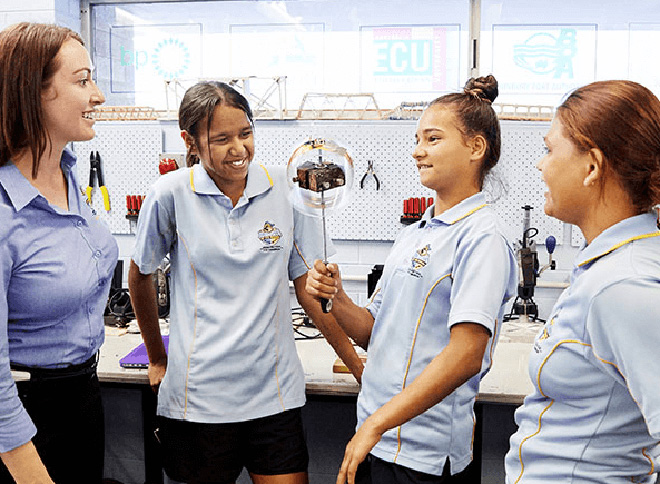 A teaching duo has transformed maths and NAPLAN performance in a Victorian primary school and have been named joint Outstanding Primary Teacher winners at the 2019 Australian Mathematical Sciences Institute (AMSI) Choose Maths Awards.

Recognised for their creative approach to strengthening mathematics learning and teaching at Boneo Primary, Liz Dewar and Ryan Jellie will share the $10,000 prize, including $2500 each for professional development and a $5000 funding injection into its mathematics program.

Delivering a significant boost to the school's NAPLAN results, the pair instigated a dramatic transformation at their school that has seen student performance and perception of maths soar.

As well as creative approaches and exciting activities such as setting up a meteorite landing site, the pair has changed student perceptions with a tailored learning approach. Student surveys have revealed the depth their program’s impact. When first surveyed 80% students admitted to hating maths, within 18 months follow up surveys revealed 60% said they now love it.

AMSI Schools Program Manager and Choose Maths Project Director, Janine Sprakel said the panel was blown away by the Boneo Primary School duo and their extraordinary impact on the school community. Liz and Ryan, she said, have transformed not just the school but the whole community.

Janine said Liz and Ryan’s leadership and impact through innovation was particularly impressive They realised it was critical to engage everyone if they were to drive real change for mathematics learning at their school.

“They have pulled off a transformation that has turned around student engagement and changed how maths is taught and learnt,” she said.

Judged by a panel of maths education experts, the teacher awards acknowledge educators who demonstrate excellence in leadership, creativity and innovation and the engagement and mentoring of colleagues and students to strengthen outcomes for girls in mathematics.

“This year’s winning teachers are helping equip a generation with the necessary mathematics to thrive in the future where mathematical sciences increasingly underpin any thriving community. Importantly the impacts of their innovation, excellence and passion are felt not only in their own classrooms but across their schools and communities,” said Brown.

“The outstanding student videos show the way mathematics can engage students to produce extraordinary demonstrations of their deep understanding together with their drive to powerfully communicate that to others."?