Using Language to Encourage Others 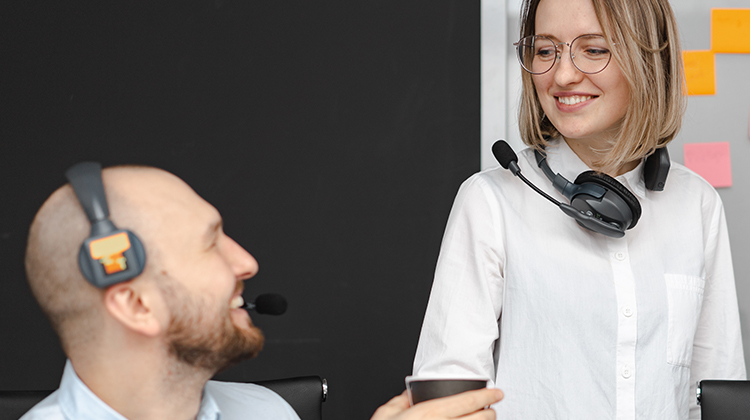 The power of words should be front of mind in schools.

At probably no other time in history has the need been so great for educational leaders to encourage and build people around them – teachers, students, parents, and community members. The field of Invitational Education (invitationaleducation.org) provides numerous strategies for creating inviting environments in which people can flourish. The developers of invitational theory used the starfish analogy to talk about five ways to create inviting schools and organizations (Purkey et al., 2020): people, places, policies, programs, and processes – the Five Ps.

First, Purkey et al. (2020) suggested that people should focus on being inviting. They can use language to welcome and affirm others. Places can also be inviting. They should be clean, neat, and beautiful. In addition, policies should be fair and equitable. Programs can include engaging and inviting activities for students, and processes in the school and classroom can be designed to help people cooperate and collaborate.

Binyamin and Brender-Ilan (2018) found that Leader Motivating Language (LML), which “refers to the leader’s ability to strategically use language to motivate employees” (p. 467), was related to employee vitality and proactivity as well as to psychological meaningfulness (“the degree of meaning that individuals discover in their work-related activities”) (p. 468). Basically, “LML fosters the development of employees’ proactive behaviors by shaping a psychological context of meaningfulness and facilitating their motivational state of vitality” (p. 471). In a study by Mayfield and Mayfield (2010), the use of LML with individuals significantly impacted the ways employees performed as well as their satisfaction with the job.

Smith and Mack (2006) discussed the importance of educators using language to build people. According to them,

‘The bottom line is that words do have power. They build up people and give them the mind-set that they can do it, but words can tear down people leaving them with the impression that they are nothing and never will be anything . . . . Words can create hope or despair. Words can give birth to ideas and challenge people to great heights. Words can empower or enslave. Those of us who have chosen a life as educators must have a higher consciousness of our words. The school, via its agents . . . must be ever mindful of the power of words.’ (pp. 42-43)

Sujansky (2008) talked about the leaders with whom she had worked and concluded, “No matter what gifts they brought to the role of leader, they all had one thing in common: their primary tools of leadership were words” (p. 32).

Our words tend to flow from what we are thinking about the people with whom we are communicating. Babad et al. (1991) conducted a study in which they exposed participants to 10-second videos, audiotapes, and both video and audio of a teacher who was talking with a student who was off camera, as well as a teacher who was talking about a student. Participants included 151 experienced teachers, teachers in training, high school seniors, eighth grade students, and fourth grade students. Members of all groups were able to determine in less than 10 seconds whether the teacher liked or did not like the student, and whether the teacher believed the student would be able to do well. While this study was focused on students, adults can also discern another person’s attitude toward them.

Ask Key Questions
We can use key questions to help us have an inviting mindset. Cameron-Bandler (J. Grinder, personal communication, June 1993) observed that people generally ask themselves questions as they are going through the day. Questions may be closed-ended such as “Will I make it through the day?” “Will I encounter a traffic jam on the way to work?” “Will I do well in my job today?” The answer to these questions is either “yes” or “no.”

We can also ask ourselves open-ended questions. Miller (2004) recommended starting questions with “How” or “What” as opposed to “Why” or “When” or “Who.” He also suggested using “I” rather than “you,” “we,” “them,“ or “they” and focusing on taking action. Some possibilities might be: “How can I encourage everyone I meet today?” “How can I be a source of hope today?” “How can I build up people I meet today?” What questions might you be able to ask to create a mindset for building people with words?

Presume Positive Intentions
We can also presume positive intentions on the part of people, and we can avoid labeling behaviors. I learned this lesson when I was co-presenting a day-long seminar to approximately 100 K–12 teachers that was part of a 3-year project. Teachers who were sitting at a table in the back of the room were making a lot of noise and did not appear to be on task. I immediately labeled their behavior and told my co-presenter, “They are rude!” He wisely said, “Well, Jenny, I never make a judgment about people’s behavior until I have brainstormed at least 30 reasons for what they are doing. Let’s have some fun with this.”

We asked the group to do an exercise and brainstormed some ideas. Then, we went to their table to find out what was going on. We learned that one of the women had been so committed to attending the training that she had come that morning even though she should have gone to the hospital to deliver her first baby. Her friends were counting the seconds between her contractions so that she could stay as long as possible. What might be some of the positive intentions that people in your sphere have for doing what they are doing?

Give Genuine Compliments to Individuals and to the Group as a Whole
One way of using language to build people could be to give genuine compliments to individuals as well as to groups of people. We can intentionally look for what people are doing well. How have you felt when people have given you compliments and thanked you for what you were doing? When we are visiting classrooms, we can point out things that teachers are doing well. When we are meeting with the faculty as a whole, we can compliment the group. “We had a smooth beginning of the school year. Everyone worked hard to make that happen. Thank you!”

We can give compliments verbally, and we can give compliments in writing. When I was teaching at the elementary level, our principal would visit our classroom on a regular basis. He always left a complimentary hand-written note pointing out something I was doing that helped the students to learn. I kept those notes for many years and treasured them. What might be some compliments you could give to those with whom you interact?

Point Out Strengths
We can also point out people’s strengths. People tend to do more of what others have rewarded them for doing. Some possibilities might be: “You do a detailed job on your lesson plans.” “You have built a deep rapport with the students in your class.” “You always have engaging activities going on in your classroom.” What might be some of the strengths of your teachers, students, parents, and community members that you could point out?

Give People Powerful Identities
We can often see things in people that they had not yet seen in themselves. We can see their talents, their passions, and what gives them joy. When we say, “You are a _________,” we are giving people identities. Some examples might be, “You are a hard worker.” “You are a caring mother.” “You are a dedicated teacher.” “You are a lifelong learner.” What might be some identities that you could give to those around you?

Tell People Compliments That Others Have Made About Them
We can also share compliments that other people have made about them. We might say, “Mrs. A, who has a child in your classroom, was telling me how motivated her child is and how much he likes you.” “Your colleague, Mr. B, told me how much he enjoys working with you.” When talking with a student, we might say, “Your teacher said you work really hard and complete assignments on time.”

Paraphrase What People Have Said
We can paraphrase what others have said to show show we are listening. Costa and Garmston (2019) suggested using “you” rather than “I” because the use of “I” puts the focus on us. They also suggested using several types of paraphrases. We might put what people said into different words: “You are thrilled that this is happening.” “You are concerned about X.” We could also categorize what they are saying: “You have two ideas: X and Y.” “First, you want to do X; next, you want to do Y; finally, you want to do Z.” In addition, we might listen for the deeper meaning behind what they are saying: “You see yourself as a person who empowers others.” “Your ultimate goal, then, would be to help every student in your classroom to be successful.” “You greatly value the students in your class.”

Use Uplifting Words
Sujansky (2008) suggested that leaders could benefit from using “Words of Success” (p. 32). Words such as “problem,” “difficulty,” “crisis,” “bad,” “hard,” “failure,” “limitations,” and “wrong” can create a less than inviting environment. On the other hand, words such as “possibilities,” “happiness,” “joyful,” “moving forward,” “potential,” “opportunities,” “options,” “resources,” and “learning” can help to create an inviting environment. What uplifting words might you be able to use?

Use Words That Bring People Together
Steffens and Haslam (2013) analyzed the campaign speeches of candidates for Prime Minister in 43 Australian Federal elections since 1901 to determine the frequency with which they used personal pronouns (“I” and “me”) and collective pronouns (“we” and “us”). They found that “victors used more collective pronouns than their unsuccessful opponents in 80% of all elections. Across all elections, victors made 61% more references to ‘we’ and ‘us’ and used these once every 79 words (vs. every 136 words for losers)” (p. 1). By using words such as “we,” “us,” and “our” rather than “I” and “you,” we can communicate that, “we are all in this together.”

Say What You Will Do Rather Than What You Will Not Do
People frequently ask us to do things. If we are not able to do what they are asking, we could flip the request around to let them know what we are able to do. “Could you please let me know the agenda for the faculty meeting?” “I will be glad to let you know the agenda tomorrow.”

Use “And” Rather Than “But”
How do we feel when we have made a statement or a suggestion and someone says, “But . . . .?” The word “but” tends to negate what came before. “I think we should do X.” “But we cannot do that.” The suggestion might be to use “and.” Instead, we might say, “Yes, and here is another possibility.”

Jenny Edwards, PhD, is the author of Inviting Students to Learn: 100 Tips for Talking Effectively with Your Students (ASCD, 2010). She also wrote Time to Teach: How Do I Get Organized and Work Smarter? (ASCD, 2014), and she co-edited Invitational Education and Practice in Higher Education: An International Perspective (Lexington Books, 2016). She teaches doctoral students at Fielding Graduate University, which is located in Santa Barbara, California. She can be reached at [email protected]