The thing about plagiarism or maybe paying someone else to write your paper for you is that it is counter-productive. So a student might have managed to pull a fast one and perhaps received a good mark but it’s kind of self-defeating in that they will not have learned much. 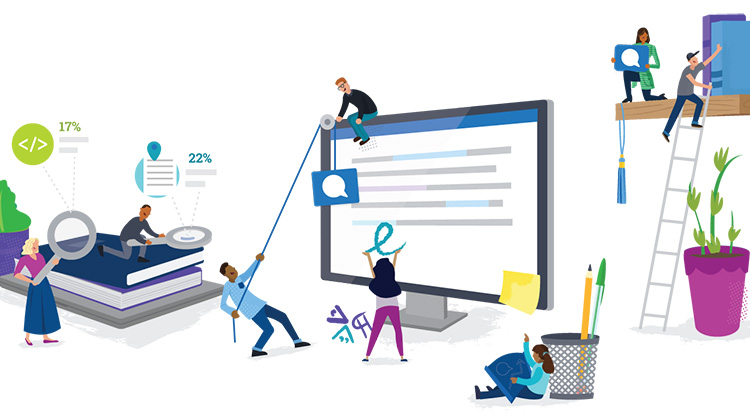 The thing about plagiarism or maybe paying someone else to write your paper for you is that it is counter-productive. So a student might have managed to pull a fast one and perhaps received a good mark but it’s kind of self-defeating in that they will not have learned much.

It’s also not a great habit to get into whether you’re talking about a future academic career or life beyond education.

Much better if the behaviour is noticed early and addressed rather than left alone and allowed to turn into something that might do some real damage. That’s the idea behind academic integrity software Turnitin; it’s not about catching students out so much as identifying the behaviour and putting them on the right path.

And from what teachers are saying, the software also alleviates a lot of the legwork around checking if something is amiss and streamlines tasks like assessment and recording student performance, leaving them free to do actual teaching.

Turnitin is also getting better at its job with recent AI additions to the software, it is cutting edge stuff and comes in two parts.

“In the area of assessing essays, we’re using AI to determine not only if a student’s work is similar to other work, which is more of a brute force technology, the AI is used to fingerprint a student’s writing and provide some additional information to the instructor about how their writing is progressing as well as the probability that the student actually wrote the work,” says Valerie Schreiner the Chief Product Officer at Turnitin.

“We find that even in the high schools there is some portion of students that is paying for essays or maybe their parent or a relative are writing their essays, it’s going to come up with zero from a traditional plagiarism perspective, it’s not a result of copy-paste plagiarism or collusion with another student, but they also didn’t write it. The AI is used heavily for detecting those scenarios.”

Using AI, Turnitin is also looking to alleviate the amount of tedium involved in assessment to both leave time for more instruction and increase the frequency of assessment which is known to have a strong impact on learning.

“In 2018, we acquired Gradescope, a technology out of the University of California Berkley that uses a different kind of AI. Gradescope integrates the latest machine learning capabilities to dramatically eliminate redundant work from the grading process, particularly for STEM (science, technology, engineering, and math) courses. Gradescope streamlines the digital collection of work, accelerates consistent and unbiased grading, and presents meaningful statistics to help identify class trends and student needs.

“You can give an examination either digitally or on paper and our assessment technology can automatically group students who answered a question in the same way, which creates tremendous time savings for an instructor, giving one set of feedback to a group of students who answered to the question similarly. Depending on the discipline, it provides up to a 90 per cent time saving on marking.

“Personalised learning is only as good as the frequency of assessment, otherwise the personalised path becomes stale, and so a lot of what we do at Turnitin is about making assessment and feedback more efficient so it can be more frequent. If feedback comes a week later it is too late for it to have an impact,” Schreiner says.

The software is easy to use and integrates well with LMSes including Blackboard, Instructure, Canvas, Moodle and D2L. In January, Turnitin announced the general availability integration with Microsoft Teams and is seeing a lot of interest as many schools are now using Teams to manage assignments.

Microsoft Teams is a tool for teamwork in Office 365. Conversations, files, meetings, and apps reside in a single shared workspace and it works on mobile devices.

“Uptake often depends on how nicely Turnitin fits within other systems that are set in place.

“We’re the only integrity provider that has a deep integration with Teams, when Turnitin is used within the context of Teams we see the usage increase by a factor of 5 to 10 which says it is very meaningful.”