Forty-seven of the state’s emerging young artists, who excelled in VCE Art and Studio Art, exhibit their work in the annual exhibition Top Arts 2017, featuring 57 pieces drawn from over 2600 submissions. 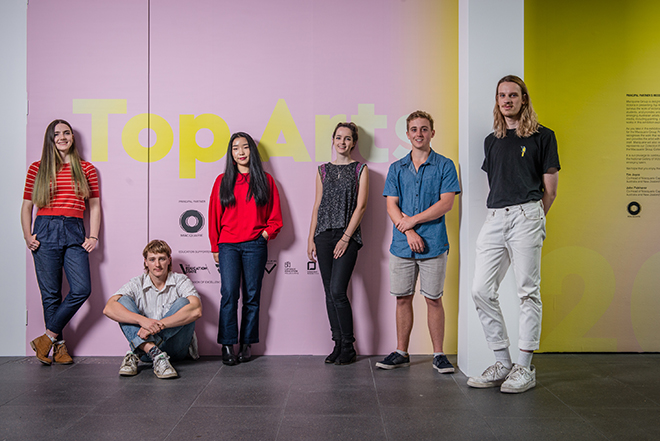 The fragility of human connection in an increasingly uncertain world, the degradation of the environment, and the journey to self-discovery are just some of the themes explored in Top Arts 2017, now at The Ian Potter Centre: NGV Australia.

Forty-seven of the state’s emerging young artists, who excelled in VCE Art and Studio Art, exhibit their work in the annual exhibition, featuring 57 pieces drawn from over 2,600 submissions from across Government, Catholic and Independent schools.

This year self-identity was a key theme. Warragul student Maggie Hamilton challenged gender stereotypes with her photographs of young women competing in motocross, a male dominated sport. Swinburne Senior Secondary College student Rukaya Salum Ali-Springle also reflected on identity with her image tackling the underrepresentation of people of colour in media and the dominance of western beauty ideals.

Mardi Denham-Roberts, a student from Caulfield North, places beauty standards under the microscope with her large sculptural work which digitally merges human wrinkles. The kaleidoscopic work aims to contrast the inelasticity of aging bodies with the popular obsession with flawless and youthful skin.

The state of the environment served as a compelling subject matter for some students, with Cameron Moorhouse’s sculptural work Extinction, inspired by a recent trip to Africa where he learned about the decimation of the rhinoceros population. George McGrath’s Who Cares (Sushi shark)?, a series of connected paintings across five wooden panels, addresses animal conservation and the degradation of marine life whilst simultaneously paying homage to Warhol’s iconic use of the Campbell’s soup can as a mark of consumerism.

Various digital mediums were employed by this year’s entrants, with students Victor Moore and Briellen Ramsay favouring animation, and Brodie Lowe’s use of computer programs to create three-dimensional digital renderings of imagined landscapes.

Unexpected materials were also utilised, with Morgan’s Trencher’s application of human hair for her abstract sculpture Specimen 2, exploring the use of scientific materials as ornamentation, and Ruby Marchese combining human hair with papier-mâché for her portrayal of the illusion of security in the current global state.