Theatre and science come together to boost littlies in STEM

What do you get when a leading medical research facility and an internationally acclaimed theatre company work together? World leading STEM resources. 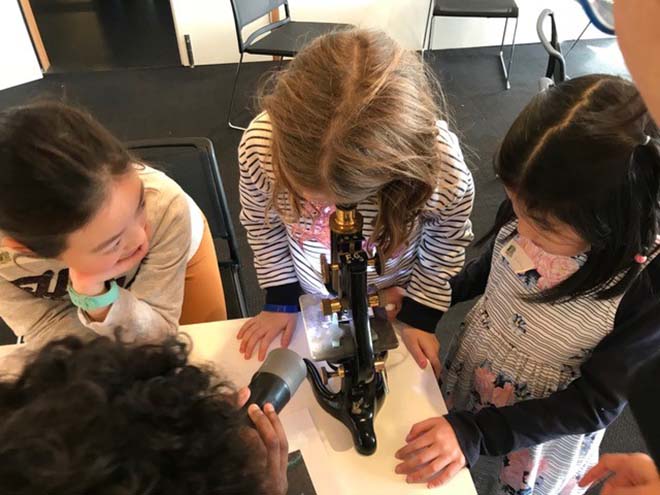 What do you get when a leading medical research facility and an internationally acclaimed theatre company work together? World leading STEM resources.

It’s a case of getting them while they’re young. Macquarie University’s Dr Egg Digital – which was previously an independent internationally-renowned, children’s theatre production company – has partnered with the acclaimed Australian research centre the Garvan Institute of Medical Research to engage primary students in STEM-based subjects in ways that will sustain interest from primary school, through secondary education and uni.

With the support of a recently-awarded City of Sydney grant, Dr Egg Digital and Garvan have developed workshops to create puzzle prototypes for primary students to investigate, research, and explore the Science and Technology curriculum through a series of scientific adventure stories and games.

Students from City of Sydney OOSH afterschool care centres in Redfern and the Rocks, as well as Queenswood School will design puzzles and also enter the Garvan Laboratories, learning directly from scientists about science inquiry and designing experiments, all relevant to the new National Science and Technology Curriculum, in place nationally from 2019.

“We want to create a safe and imaginative place for children to learn.”

“The immersive story-world invites students to explore biology, chemistry, science inquiry themes, and ethics through the eyes of three inventive kid-heroes with special powers. Through the story-world, they navigate across problem-solving adventures, quests and games.”

“We have the ongoing support of Macquarie University via its Incubator Hub, as well as connections with the University’s Education Studies and Biological Science Departments, and innovation programs, providing business and commercialisation support, and allowing us to focus on developing the product.”

The Dr Egg Adventures story-world was based originally on Fargher's original theatrical script, part of a national and international theatre production Dr Egg and The Man with No Ear, featuring puppetry, new media and animation. The work premiered at the Sydney Opera House and was later re-staged in Chicago at Redmoon Theatre and toured Canada through 2010-2011. The theatre script, honed on these three remounts, went on to win the AWGIE award for scriptwriting in Children’s theatre in 2011.