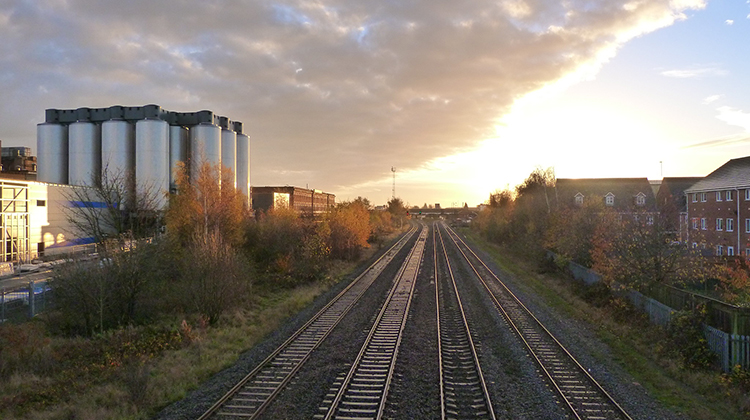 The notion that poorer kids will do worse is a falsehood

The Gospel Reading from Matthew 13:12 on one Sunday morning struck a dissonant chord because it appeared to be an advocacy for the common inequalities that exist in our communities and schools.

10 And the disciples came, and said unto him, Why speakest thou unto them in parables?

11 He answered and said unto them, Because it is given unto you to know the mysteries of the kingdom of heaven, but to them it is not given.

This was like hearing only a part of a conversation, and it became clearer that the Apostle was saying that Jesus spoke in parables so that only those who believed would understand the Mysteries of the Kingdom of Heaven, and they would be given more; but those who did not, would be deprived of what they had. Unfortunately, this common misinterpretation of this Gospel has now developed a life of its own and in the language of administration, business and finance the Matthew Effect is becoming topical almost 2000 years after the parable was recorded in the Gospels. And, as Rigney (2010, p. 1) observed, this Gospel passage is now commonly interpreted in the lay community as a Biblical justification of “the rich get richer and the poor get poorer”.

Robert Merton (1968), who popularised the term Matthew Effect, examined the effects and influence that Nobel Prize winners have in science, and he described how the multiplier effect of success and wealth manifested itself four ways in science:

… that eminent scientists get disproportionately great credit for their contributions to science while relatively unknown scientists tend to get disproportionately little credit for comparable contributions. As one laureate in physics put it: “The world is peculiar in this matter of how it gives credit. It tends to give the credit to [already] famous       people”. (p. 57)

Contemporary research by Bol, de Vaan and van der Rijt (2018) showed that the Matthew Effect is still evident in science funding in Holland. The authors concluded that:

… funding of early career scientists exhibits a Matthew Effect that operates through two mutually reinforcing processes: On the demand side, candidates who won prior awards are evaluated more positively than nonwinners, while on the supply side, scientists who were successful in past contests select themselves into applicant pools of subsequent contests at higher rates than unsuccessful scientists (p.4890).

The Matthew Effect and the achievement gap in literacy
A phenomenon of which teachers and school leaders are very aware is the impact of the Matthew Effect on students’ learning and life prospects. The Achievement Gap is obvious in the earliest years when some prospective students already know their colours, letter names and they can count to 10, while their less fortunate colleagues experience the daily traumas concerning lack of food, lack of sleep, and personal safety. Maslow’s Hierarchy of Needs is such an important descriptor of the factors influencing success at school.

Socio-economic status (SES/SEI) impacts very heavily on children’s vocabulary development and the research by Romeo, Leonard, Robinson, West, Mackey, Rowe and Gabrieli (2018, p. 700) confirmed that, “Children’s language exposure varies substantially in relation to their socioeconomic status (SES). SES represents the social and economic resources of an individual or group, and children from lower-SES backgrounds hear fewer and less complex utterances, on average, than their more advantaged peers”.  Compounding this, is the matter of negatively biased teacher expectations that were examined in a number of works (Glock & Krolak-Schwerdt, 2013; Glock, Krolak-Schwerdt, Klapproth, & Böhmer, 2013; Rubie-Davies, Hattie, & Hamilton, 2006; Speybroeck et al., 2012) and built around the seminal work of Rosenthal and Jacobson (1968) and their study Pygmalion in the Classroom.

Stanovich (1986), researching reading, noted that the good readers get better, and in a relative sense, the poor readers become poorer, as the gap widened:

The concept of Matthew Effects springs from findings that individuals who have advantageous early educational experiences are able to utilize new educational experiences more efficiently (Walberg & Tsai, 1983). Walberg et al. (1984) speculated that "those who did well at the start may have been more often, or more intensively,        rewarded or their early accomplishments; early intellectual and motivational capital may grow for longer periods and at greater rates; and large funds and continuing high growth rates of information and motivation may be more intensely re-warded” (p. 381).

A stylised representation of the reading Achievement Gap can be seen in Figure 1. 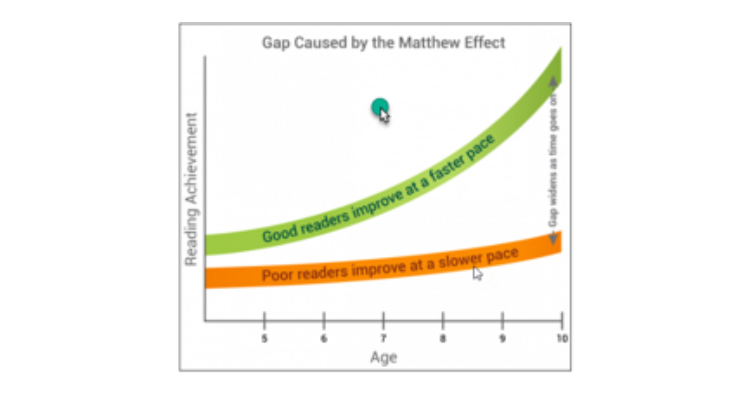 ICSEA and the Matthew Effect
Success in schooling is a multi-factored affair, with a kaleidoscope of conflicting influences impacting on students’ performances daily. After the major kerfuffle caused by the publication of Richard Herrnstein and Charles Murray’s The Bell Curve, social scientists played safe and used socio-economic status as the major predictor of students’ success in school. The problem with this in education is that using the SEI/ICSEA ranking is a classic example of implementing a false cause fallacy. Most of us had the mantra “correlation is not causation” drummed into us when learning research methods, but in relation to NAPLAN testing we fail every time we use the imprecise SEI/ICSEA measure because the causes and outcomes are intertwined in a jumbled mix of leaps -of-faith. Boyd, MacNeill, Silcox and Sullivan (2018) highlighted this in the article, Bridging the Achievement Gap when they stated “… we failed our most vulnerable, disadvantaged students” (p. 2)

Recruiting, poaching and aversion
The brilliant football coach, Mick Malthouse, was always driven by the need to promote the Australian Football League, and he observed that when a vast gap develops between the top and bottom teams, the game suffers. Malthouse said: "History just shows that, in any sport, players who want to change clubs don't change clubs necessarily for money, they change for success. It makes the top sides stronger and makes the bottom sides weaker.” (Max Phillips, 2011). The same thing happens in education where schools in prime locations matched with success, not money, attract the high performing school principals and teachers to make locational choices based on the prospective quality of their lives and their work. However, in private enterprise School Boards are used to buying-in top talent, and talent scouts are employed to sound out prospective leaders who will add to the schools’ public images. Caroline Millburn, in Melbourne (2006), commented on “The Great Scramble to Poach”, and she described John Fleming’s move from Bellfield Public School to Haileybury’s Berwick campus. The Victorian Principals’ Association lamented:

… the Government had no strategy to enable public schools compete with the lucrative offers talented teachers received from independent schools and private industry (Millburn, 2006).

The flip-side of the attraction to success and attractive locations is the place of tough schools in school leaders’ career trajectories. The role of the school principals is now recognised as extremely important not only for the ceremonial aspects of schools’ operations, but also in relation to the core business of schools- students’ learning. The most expensive private schools now recruit principals with doctorates, and media experience to signal success and achievement to their school communities. Not unnaturally, it has been found that experienced and high-performing principals are abandoning the “difficult” schools across the world, as research by Loeb, Kalogrides, and Horng (2010) clearly showed:

Principals’ stated preferences and their behaviours demonstrate an aversion to leading schools with many poor, minority, and/or low-achieving students. Although these patterns may be driven, not by a distaste for certain students, but more so by a desire to serve a school with a positive climate and good working conditions, the       result remains: higher turnover in schools serving more poor, minority, and low-achieving students (p. 227).

To this extent, those very school leaders who have the capability to negate or, at the very least, reduced the impact felt in so called tough schools only add to the problem when they too depart.

Success breeds success: School catchments
The earliest linking of school quality and house prices was attributed by Seo and Simons (2009, p. 308) to Oates (1968) who hypothesised that “consumers who expect a high quality of public services reside in communities with high-quality public service programs”. In Australia, public school enrolment zones are living examples of how high performing schools attract parents who think that entry to these prestigious schools will positively influence their children’s life prospects. Speaking of the demand for entry into the top public high schools in Melbourne, Craig Gibson (2019) noted, “So intense is the demand that the Real Estate Institute of Victoria reports that some families are choosing to pay close to a $600,000 premium to secure a home near Melbourne’s top public high schools”. In Western Australian schools a similar phenomenon occurs with families relocating into the catchment areas of those schools deemed to be achieving good results. This only exacerbates the perception of the Matthew Effect, not only within the eyes of the staff in those schools that gain students, but also in the mind’s eye of those staff losing them, as it tends to be only those families with the incomes that allow them to be mobile who move out of and into a new catchment area. This can be seen as “reinforcing the lowly status of the have nots in the classroom” (Boyd, MacNeill & Sullivan, 2019, p. 1) when it comes time for the teacher to set the bar for instruction levels and the subsequent expectations around achievement.

In the United States it is reported that there is a trend for rich parents being prepared to spend millions to be able to walk their kids to (top) schools (Hoffower, 2019).

All is not lost – salvation
If we were to submit to the idea that belief drives behaviour, and this is indeed the case in relation to the Matthew Effect within school communities, then it is possible to create learning and teaching communities that stop this phenomenon in its tracks through the deliberate actions of their leaders. As indicated above, one of the most well know instances of this was in Bellfield Public School, Victoria, where the principal John Fleming turned one of the most disadvantaged metropolitan schools in Australia (CIS, 2009) into one of the highest performing schools in the state through altering his staff’s belief that demographics defined the destiny of a child. Through structural alignment and clearly articulated accountability processes built on a foundation of highly effective teaching practices around literacy, Fleming turned the Matthew Effect on its head.

We are now seeing similar occurrences in some Western Australian Schools where principals, driving clear improvement agendas built around highly effective foundational literacy practices, are negating the Matthew Effect. The Matthew Effect has the potential to offer excuses for poor instructional practices rather than school leaders/teachers looking at their current classroom instruction, and the teaching and learning communities’ embedded beliefs as a root cause of the problem.

Conclusion
The moral dimension of serving students in schools can be considered a calling, and in the low SEI and tough schools. most teachers are driven by the intention of doing good for the less fortunate students. In this situation the Matthew Effect is often alive and well, but there is often a limit to the strength of the moral intent of teachers and principals working in tough schools. Sooner or later many of these teachers will renege on martyrdom and will join the stiff competition to win a safer position in a school in a better location with less behavioural problems, and better academic achievement records. Furthermore, examining school resourcing. The Matthew Effect is seen as strongest in the so-called elite schools where auditoria and swimming pools are seen as a normal part of the rich curriculum passage being offered. We often observe that teachers in the lower SEI schools seem to have to work so much harder in minimalist environments in their individual attempts to negate the Matthew Effect and bridge the achievement gaps.

Hoffower, H. (2018, September 6). Rich US parents are paying millions to be able to walk their kids to school. Business Insider. Retrieved from https://www.businessinsider.com.au/rich-families-pay-millions-live-near-best-public-schools-2018-9?r=US&IR=T

Phonic Books (2017). What is the Matthew Effect when it comes to reading instruction?     Retrieved from https://www.phonicbooks.co.uk/2017/06/04/matthew-effect-comes- reading-instruction/

Stanovich, K.E. (1986, Autumn). Matthew Effects in reading: Some consequences of individual differences in the acquisition of literacy. Reading Research Quarterly, 21(4), 360-407.