The Broken Windows Theory posits that the deliberate breaking of windows in a community results in societal changes (disorder, fear, withdrawal), which then allows more serious crimes to creep in.
Ray Boyd and Dr Neil MacNeill, principals 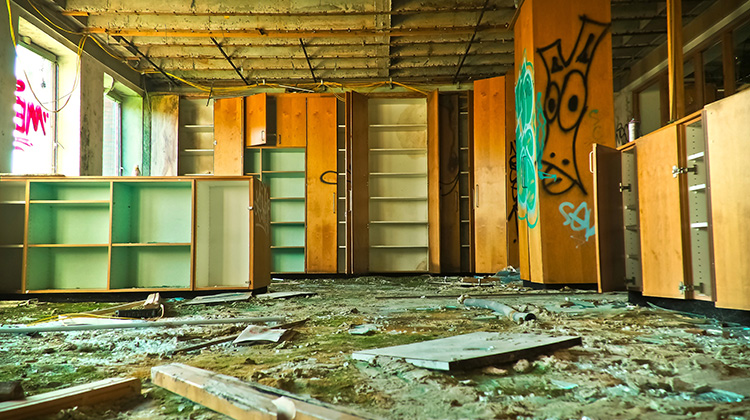 In our schools there needs to be an accepted consistency in expectations about the cultural and academic standards that characterise each school. Members of the school community soon sniff out inconsistencies and gaps between the school’s espoused platform and the platform in use statements, and the school’s culture is slowly eroded when the two do not match up. The Broken Windows Theory is very relevant to the way that modern schools operate because it gives school leaders a perception of the multitude of potential problems that impact on the schools’ operations.

Introduction
The American sociologists George Kelling and James Q. Wilson (1982) popularised what was known as the Broken Windows Theory. This theory posits that the deliberate breaking of windows in a community results in societal changes (disorder, fear, withdrawal), which then allows more serious crimes to creep in, thus starting a decline in respect for the law, property, and people’s rights. Kelling and Wilson (1982) noted that “… vandalism can occur anywhere once communal barriers—the sense of mutual regard and the obligations of civility— are lowered by actions that seem to signal that ‘no one cares’." The “no one cares” is a signal that crosses all socio-economic boundaries, and all organisations.

While the theory has become mired in the political application of police forces in relation to minor issues, the authors of this paper have seen that the theory has relevance in the leadership roles of school principals and the operations of classroom-based staff.

The well-known author, Malcolm Gladwell (2000), examined the Broken Windows Theory and said it was an epidemic theory of crime that was contagious: “just as a fashion trend is contagious – that can start with a broken window and spread to an entire community” (p. 141). He then developed what he called the “Power of Context” that says that behaviour “is a function of social context” (p. 150) and “you don’t have to solve the big problems to solve crime” (p. 151). For example, the reduction of graffiti on trains and the arrest of fare evaders had a flow-on effect on general crime on the transit system.

Catholic School Closures and Broken Windows
In relation to religious school education, Brinig and Garnett (2012) carried out ground-breaking research which investigated whether the closure of Catholic community schools had resulted in increased neighbourhood crime and decreased communal harmony. Their research showed that:

"We find that Catholic school closures are strongly linked with increased disorder, reduced neighborhood social cohesion, and, eventually, serious crime. However, our study does more. Importantly, we provide a novel test of the purported causal connection between disorder and serious crime by linking the reductions in cohesion and increase in disorder prompted by school closures to later increases in serious crime" (p. 366).

The authors had a strong commitment to The Broken Windows Theory and they demonstrated the decline in the moral standing of the community was followed by a series of events that included an increase in neighbourhood crime.

The Broken Windows Theory in Schools

Case 1: Teachers’ insistence on standards
The school year had just commenced, and the principal and deputy principals had noticed that the high standards of work and behaviour that had been achieved last year had been eroded by the school holidays and a big influx of new staff members. In the third staff meeting of term 1 the principal commenced his address to staff by raising the issue of the need for consistency in the standards expected in the school.

“Colleagues, this is a great school and I need to draw your attention to the declining standards of students’ dress, manners, and work standards this year,” he said. “Some of you think that we should adopt a more laissez faire approach and treat the students as adults. That would be fine, but these students are still kids who need our support, and I would like to draw your attention to the Broken Windows Theory that affects each one of us. Basically, Broken Windows says that failure to address small acts of crime (such as breaking windows) results in an expanding acceptance of criminal acts and the eventual destruction of the moral fabric of that community. The same holds for teaching and learning. I noticed that the Year 4 students have an untidy acceptance of the need to rule up the work pages, and date the work, Also, it is policy that the students need to learn and use cursive writing. So, in our school it is not acceptable to tell me that the students make up their own minds how they write or present their work. You are in charge, and you need to insist on appropriate standards of presentation. This is the thin edge of the “no one cares” wedge, and we have all seen colleagues fail because they failed to assert standards that reinforce their control in classrooms in the first weeks of the school year. As I walk through your classes I need to know who is in-charge in each classroom!”

Case 2: Behaviour management
The new principal had just been appointed to the local school. During his first day in classrooms, he observed that teachers were spending a great deal of their time managing behaviours that were not only interrupting the learning and teaching process, but were unacceptable. This was occurring in nearly every room that he walked through. Because of this, teachers appeared to be engaging in very little quality instruction time.

At the first staff meeting he raised the matter with staff. He began “I have noticed, in your rooms, that some students are displaying behaviours that, aside from not being acceptable in a classroom, are interrupting learning for the other students. Apart from dealing with students hitting or annoying each other, teachers seem to be ignoring the use of offensive language, calling out and blatant disrespect” After a short pause one of the teachers responded, “ We ignore the little things because we can’t target everything and so the bigger issues  are where we focus our time and energy.”

This was the response he had expected and as such it came as no surprise. It is difficult for a teacher to control and manage everything so; naturally, they looked at the larger behaviours as the biggest threat. What they failed to acknowledge or notice for that matter, is the fact that the disruption in the rooms did not begin with the more severe behaviours, it would have started small and grown from there. Students would have tested the boundaries and, once they were permitted to get away with something smaller they would have pushed the boundaries further. This ultimately became the new normal in terms of what was acceptable in a classroom. Further to this, students who would normally comply with the classrooms standards, seeing that the standards were no longer being enforced, adopted the new behaviour norms as being acceptable. In turning this around two practices had to be adopted.

In the first instance classroom teachers had to enforce the basic behavioural expectations. These included not talking while the teacher was talking, making eye contact with the speaker, raising your hand to respond, not touching other students’ property and not using inappropriate language in the room. The second practice required teachers to report highly disruptive behaviour to the principal. On instances where this occurred the student was removed from the room and the parents were contacted. In this way new behaviour standards were being established and students were seeing that the little things mattered. Students were also presented with opportunities to learn in an environment that was not being disrupted by unacceptable behaviour and when it was, the offender was removed from the learning environment.

Case 3: Graffiti
Graffiti in the school’s toilets was an ongoing issue, and something that continued to trouble the principal since his arrival at the school. Further to this, he noticed that the wooden benches outside the rooms were also littered with writing. In a conversation with the head cleaner he was informed that the toilet walls and doors were cleaned of graffiti every few weeks once when her team had some spare time and, were able to get to it.

When he inquired about the outside benches the response he was given surprised him “If it is offensive we fault it, this is then removed by an external professional team contracted by the department, however, if it’s not offensive it remains on the bench as a school problem”.

The principal noted several complications with this scenario. In the first instance, by not cleaning the toilet walls and doors of graffiti as it occurred, or at least by the start of the next day, the outward message for the students and wider community was that this was okay, we would tolerate it. This, in turn, resulted in more graffiti appearing and actually increased the time required to remove it once the cleaners got to it. Further to this, the offenders, obviously noting that the toilet graffiti was not being removed, had moved their activities to a more visible setting in the wooden benches outside the classroom and, while the offensive material was removed within 1-3 days, the less offensive material was not.

This was not to dissimilar to the situation David Gunn faced in the 1980s when he was hired by the New York Transit Authority to tackle crime in the subways. Gunn believed that “The graffiti was symbolic of the collapse of the system” (Gladwell, 2000, p.144) Like Gunn, the principal saw this as representative of the behaviours in the rooms and therefore winning this battle was important in sending a clear signal that things were going to change.

The principal directed the cleaners to remove graffiti as soon as they noticed it. He too, also took to carrying steel wool with him and, on being notified of graffiti, removed it from the walls and doors. In extreme cases the toilets were closed and students were directed to another block. The benches were a little more difficult however; the cleaners and gardener were issued with sandpaper and wherever possible the graffiti was removed. The principal also helped in this venture. Where the offenders were identified, they were made to remove the material themselves.

This application of the Broken Windows Theory, while appearing insignificant in its application, brought about meaningful change in behavioural attitudes across the school’s culture. It sent a clear message that someone cared and, while it took a bigger investment in time to bring about behaviour changes in the recidivist offenders, it stopped those students who sat on the fringes from offending.

Conclusions
The key roles of schooling are teaching and learning, and the vignettes presented above show how the peripheral actions in schools actually impact on all aspects of the school culture and operations. School leaders, school staff and education assistants all face aspects of the Broken Windows Theory every day in every aspect of the schools’ operations. Regardless of how small, or insignificant actions or incidents may appear, they all form an integral part of the fabric moulds the acceptable behaviours of students, which in turn creates the culture that permeates the school setting.

The Broken Windows Theory is still very relevant in our schools today.