Teacher Workload in Australia now amongst the highest in the OECD

Teachers continue to be put under pressure with the number of hours worked in Australia now ranking among the highest in the world. 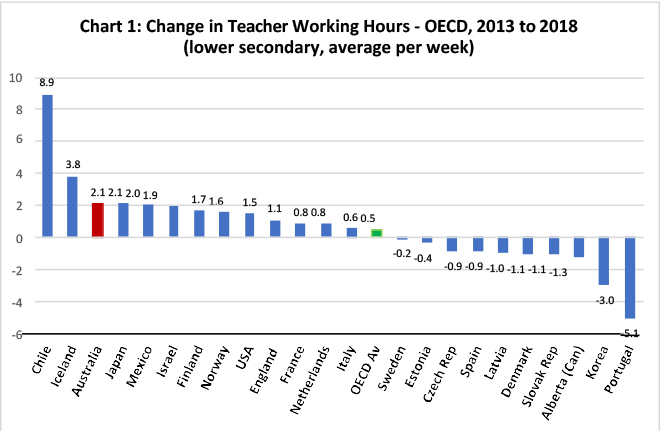 Teachers continue to be put under pressure with the number of hours worked in Australia now ranking among the highest in the world.

New figures released by the OECD Teaching and Learning International Survey (TALIS) 2018 show that teacher workload in Australia increased significantly since 2013. The increase was one of the largest in the OECD.

The new figures confirm the concerns of teacher organisations and teachers about their increasing workload. The increased workload, especially time spent on management and administration, and the stress it places on their lives is a reason reported by many teachers for leaving the profession.

Working hours for Australian lower secondary teachers increased by two hours per week in the five years between surveys [Chart 1]. This was the equal 3rd largest increase in the OECD behind Chile (9 hours) and Iceland (4 hours). The average increase across the OECD was 0.5 hours. In contrast to Australia, teachers’ workload fell in 10 OECD countries, most notably in Portugal (-5.1 hours) and Korea (-3 hours)

Lower secondary school teachers in Australia now have a much longer working week than the average across OECD countries – 45 hours per week compared with 39. The working week for Australian teachers in the 6th highest in the OECD, behind only Japan (56hrs), Alberta (Canada) and England (47 hours), USA and New Zealand (46 hours). In contrast, teachers in Finland have an average working week of 33 hours and Korean teachers work 34 hours per week. Working hours include work during weekends, evenings or other out-of-class hours.

Australian lower secondary teachers spend 19.9 hours per week in actual teaching. This is only slightly less than the average of 20.6 hours for the OECD. Teachers in Chile, USA and Alberta (Canada) spend 28.5, 28.1 and 27.2 hours respectively in actual teaching compared to 15.8 in Norway, 16.8 in Italy and 17.4 hours in Netherlands.

Time spent teaching increased by over an hour per week in Australia from 18.6 hours in 2013 to 19.9 hours in 2018. This was equal 5th largest increase out of 23 OECD countries for which comparable data is available. There was little change in teaching time in many OECD countries since 2013 and it fell by nearly one hour in Korea and Portugal.

Performance of management and administrative tasks contributes significantly to the higher non- teaching hours in Australia. Hours spent on planning, collaboration with other teachers and marking is also much higher than in most OECD countries.

Australian teachers spend the 3rd highest number of hours on management and administration in the OECD. Australian teachers spend 6.5 hours per week on these tasks compared to an average of 4.1 hours in OECD countries and only 1.4 hours in Finland and 2.1 hours in France. Only teachers in Japan (8.4) and Korea (7.1) spend longer hours on management and administration.

Comparable figures for management tasks are not available for 2013 but there was little change in time spent on administration since 2013.

Australian teachers also spend more work hours on lesson planning, collaboration with other teachers and marking student work than in most OECD countries. The Australian average of 15.9 hours is significantly higher than the average for the OECD of 13.5 hours [Chart 6]. Only teachers in England, Japan and Portugal spend noticeably more hours on these activities than teachers in Australia. Finland teachers spend just on 10 hours per week on these activities.

The Australian Council for Educational Research will publish a national report containing detailed analysis of TALIS 2018 results for Australia in late 2019.