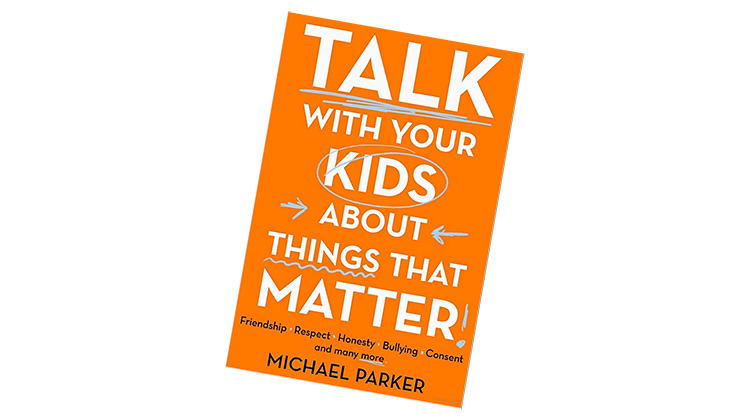 A hormonal, sullen teenager isn’t the easiest person to communicate with and getting one to open up is difficult, but it can be done. The answer lies in how conversations are started.

Asking questions that are designed to lead to other questions so the conversational ball starts rolling is one way to get teenagers to talk.

The program Geoffrey Robertson’s Hypotheticals was a TV staple in the 80s and Michael Parker the Headmaster of Newington College in Sydney says that Robertson was a big influence on his approach to starting conversations with kids which led to his writing Talk With Your Kids About Things That Matter.

“I was hugely influenced when I was a child by ‘Geoffery Robertson’s Hypotheticals’, a panel of illustrious people were thrown difficult and curly scenarios by Robertson that probed a whole lot of ethical issues. At the beginning of my teaching career I then stumbled upon the emerging ‘Philosophy in Schools’ movement which presented stories and activities as a way to get into philosophical speculation – and I immediately started applying and making up my own scenarios.

“I also wrote a few novels when I was younger (some published, others propping up the bed) and I tried to use the same imaginative practices to come up with scenarios and activities.  Of course, I can’t take much personal credit for the concept of scenarios – using hypotheticals in philosophy goes back thousands of years,” Parker says.

Teenagers have always been relatively uncommunicative, neurochemically their brains are rewiring and a lot of the empathy pathways are actually sheared away during that period.

“Psychologically they are in that brackish water of not being a child anymore, but also not having the responsibilities, or indeed the maturity, of adults. You can also add to that the baleful influence of mobile devices – the worst invention since asbestos or the vibrating ab-belt – which gives kids total licence to avoid human contact and prune their attention spans down to seventeen seconds,” says Parker.

The influence of social media has been pervasive and the ability for anyone to have a platform via a mobile phone makes real, unbiased conversations with teenagers about issues like disinformation all the more important, Parker addresses this in the new edition of his book.

“Since the first edition came out, so much in the world seemed to shift, and rarely in a good way. The most obvious one is the pandemic and the moral questions that it raised. The sudden emergence of social media has profound effects on what kids are consuming and thinking about, as well as how they are relating to each other.

“Unfortunately too the phenomena of fake news has made the very realm of ‘facts’ much more contentious. I keep pinching myself that this has actually happened. Can it really be that fake facts have become weaponised so that people become exhausted at even trying to find the truth and so give up – to paraphrase Gary Kasparov? It certainly means that a rigorous course in how to think has become more important than ever. In fact, the school I am at is starting up a Critical Thinking Centre at which we plan to do all we can to support this,” he says.

Although the book is designed for parents, it can easily be used in schools. The conversations are ‘bite sized’ so a lot of them can suit individual lessons or even ten minutes embedded in a lesson. You can also group a whole lot of them together under themes (how to treat family and friends, critical thinking mistakes, your identity etc) to get whole units.

“A key element is practising the skills as a teacher of keeping the conversation going. I can heartily recommend the courses run by the Philosophy in Schools Associations in each state. The NSW one (my state) is https://web2.northsydgi-h.schools.nsw.edu.au/pinsnsw/,” Parker says.

Parent/kid relationships have also evolved and that can play out in many ways, good and bad.

“I think that there is less of the ‘command’ economy from parents than there was at the beginning of my career. Elements of a child’s life tend to be discussed, negotiated quite a bit more, which is not a bad thing at all. On the other hand, this can lead to a false sense of equivalence of experience, that boundaries are porous and everything is up for negotiation. Indeed, as a parent, I have been sometimes guilty of this.

“Children can sometimes then get quite entitled and can be aggrieved or offended when boundaries come in from other places. It is really important here to say that I am only speaking about some children and families. There are many examples of the opposite amongst young people,” he says.