It's become a tradition at Trinity Grammar and Scott Morrison recently became the fifth sitting Treasurer to answer some tough questions from the school’s economists since the first Q&A in 1983. 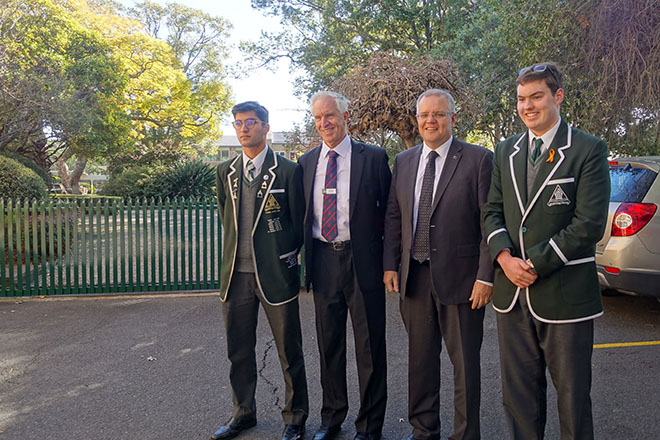 It's become a tradition at Trinity Grammar and Scott Morrison recently became the fifth sitting Treasurer to answer some tough questions from the school’s economists since the first Q&A in 1983.

Year 12 student Jacob Gadiel took the opportunity to ask whether Mr Morrison would consider contesting leadership of the Liberal party should the opportunity arise, ouch. In true polly style, Mr Morrison was quick to reply that he is certain that Mr Turnbull will win the next election. Anyway, we know who’s gunning for the PM.

School Captain, Saachin Simpson asked Mr Morrison how he aims to achieve a balanced budget by calling for tax cuts. Elliott Earnshaw of Year 11 recommended strategies that the Federal Government could implement to achieve the targets set by the Paris Climate Agreement, and Alex Kolesnikoff of Year 12 provocatively questioned the benefits of new appointment Philip Gaetjens as Treasury Secretary.

Economics and Business Studies students along with students from the Economics Q&A Club, joined the Head Master, Tim Bowden, Barry Collins from the School Council and Treasury officials, for the intense Q&A session.

“The Question and Answer sessions provided a unique and exciting opportunity for our students to learn from a prominent politician. I’m sure it has given Trinity students more confidence and motivation, making them better Australian citizens. The students clearly appreciated it, and I overheard one Year 12 student comment that it was a highlight of his six years at Trinity!”, reflected Ian Moore, Head of Economics at Trinity.

Some other noteworthy questions included: ‘Do you have nightmares about another GFC?’; ‘Do you believe the chances of the Liberal Party winning the next election are the same as the Sharks winning this year’s premiership?’; and ‘Are you privately pleased that the government was persuaded by the opposition to set up the Royal Commission into the financial services sector?’