Scrap the textbooks: why making maths fun is a nationwide priority

My kids were born mathematicians. But around the time they started school, their natural affinity for mathematics began to die.
Christopher Hogbin, Global Digital Education Lead 3PLearning.com 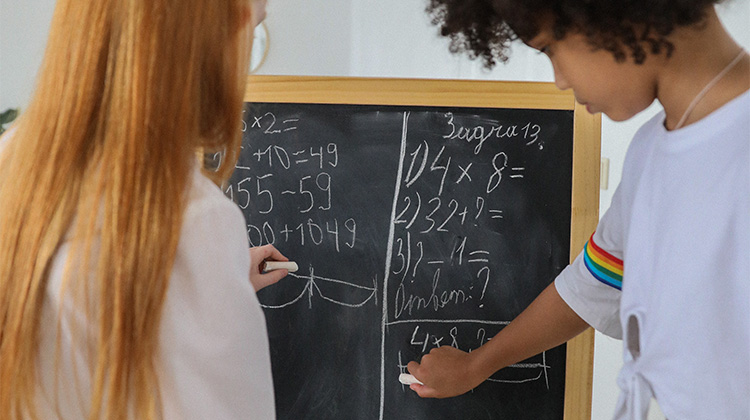 Its fun, not hard

My kids were born mathematicians.

My eldest developed an interest in fluid mechanics when he was three, studiously observing the ripples that spread every time he dropped a pebble in a puddle. Meanwhile, his younger brother set about testing geometric proofs by rolling toy cars down progressively steeper banisters.

But around the time they started school, their natural affinity for mathematics began to die.

The most relevant subject in their lives became the most inapplicable. The most practical subject became the most abstract. The curious became boring. Instead of wonder, maths only filled them with insecurity and frustration.

They’re not alone. Australia-wide, mathematics is suffering from an epidemic of disengagement, and a whole generation of students are graduating with only limited numerical ability.

The consequences of this trend are beginning to show. According to the Engineers Make Things Happen Report, only 6.2% of girls and 11.5% of boys study advanced maths in Year 12 – disturbing figures in a nation that’s trying to shift to an innovative, technological economy. No wonder 57% of our engineers are born overseas; Australian kids are opting out of mathematical career paths before they’ve even left primary school.

Education itself is also feeling the effects. In each new crop of teachers, mathematics specialists make up a dwindling minority. The shortage has meant many maths classrooms are led by teachers who feel ill-equipped to handle the subject and therefore rely on ‘hands-off’ teaching practices that kill enthusiasm: rote learning, silent textbook work, and an endless procession of archaic worksheets. So continues the cycle.

That’s not to say we haven’t done anything about the problem. Earnestly, we’ve responded by packing even more into the curriculum, overloading primary schoolers with high-stakes tests, and shaking our heads over NAPLAN results.

But as the numbers continue to decline, I think we can now confirm that we’re doing it wrong.

Let’s look abroad for comparison. In countries that have successfully improved students’ engagement with the subject. The answer is not adding more to the curriculum, focusing on learning facts, and having more higher stakes testing. It’s the opposite.

In Finland, students aren’t introduced to rules and symbols before the age of seven. They spend their first years of primary school exploring maths through hands-on play – just as they would at home.

In Estonia, maths is integrated across subjects and throughout the learning environment. Schools have numbers painted on stairs and shared charts where children record the daily temperature or tallies of birds they’ve spotted in the playground.

Closer to home, Singapore has adopted a “teach less, learn more” policy, so students can build a deep understanding of maths at their own pace, instead of rushing through a packed curriculum.

These approaches succeed because they show students that maths is about more than just rules, memorization, and abstraction. Instead, it’s a living thing: rich, relevant, creative, and maybe even fun.

Australian teachers and parents might regard these examples with skepticism. What’s well and good for Estonia might not be as applicable to regional Queensland, for example. This is true, but I’m also convinced that we don’t need major institutional changes just to make maths fun instead of repellent. In truth, it’s something any teacher or parent can do whether they’re an expert in the subject or not. Here’s how:

Get kids to solve real-life problems
Authentic problems put an end to the “when will we ever use this” complaints that turn so many kids off mathematics. Here’s what they all share:

They’re simple to set, but challenging to solve, and so much more engaging than the basic, “apples and oranges” word problems that clutter most worksheets. Ask kids to figure out how long it takes to fill a watering can, create a system to keep track of how much fruit they’re eating, or find three new mathematical symbols in the newspaper. Resist the urge to give them full guidance and you’ll be surprised by what they come up with.

Make maths collaborative
Cut back on the solitary textbook work. Collaboration makes maths so much more engaging and it reflects the way maths is used in the ‘real world’ to connect problem solvers with different strengths. What’s more, it encourages discussions that promote deeper conceptual understanding and enhanced communication skills.

This is easier than ever in the age of remote learning. Connect kids with thousands of global peers to celebrate World Maths Day online, or set up a Skype homework date with their friends.

Emphasise play and discovery
The most confident maths students approach the subject with curiosity. Nurture this in the early years by encouraging them to experiment with numbers and shapes. Guess then count the number of stairs at home, go on a quest to discover a new shape, keep a running tally of different cars spotted in the street… Anything that fosters an organic connection with maths.

Sound more like play than work? Good – it’s about time. Because if we’re serious about building an innovative and entrepreneurial future, we have to get our kids excited about numbers sooner rather than later.

For many of us adults, this means we’ll have to loosen up and change our mindsets about the subject. Discuss maths at the dinner table. Turn it into a game. Scrap the textbook and have some fun instead. With both parents and teachers celebrating the magic of maths, our kids will be quick to follow.

World Maths Day launches around the world today -  Teachers, students and parents are invited to register to take part in the biggest online global maths event held across 48 hours on Wednesday 5th May, 2021.  Registration at www.worldmathsday.com

Photo by Gabby K from Pexels