There is a troubling contradiction in NSW's Hunter region; youth unemployment sits at about 30 per cent while jobs at advanced engineering companies go unfilled. 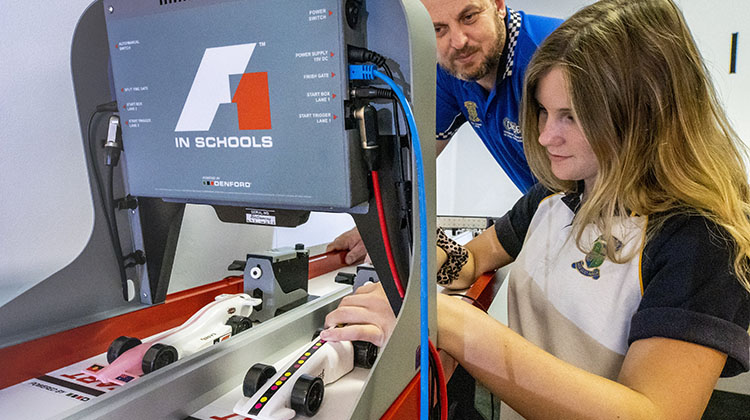 There is a troubling contradiction in NSW’s Hunter region; youth unemployment sits at about 30 per cent while jobs at advanced engineering companies like Boeing and BAE Systems go unfilled and companies need to look outside of the region for employees.

That disconnect and setting it right has been Scott Sleap's concern for 10 years or more now, so the name will be familiar. And he has been busy, it’s quite hard to keep up with the STEM initiatives Sleap has been involved in.

The OECD has named one of his programs as world’s best practice for workforce development and another recent award was the Commonwealth Bank Teaching Award. He won the Prime Minister’s Prize for Excellence in Science Teaching in 2018.

What he’s doing is working, the schools adopting his practical STEM programs are growing in number, the programs are being expended to all year levels while the first cohorts of school leavers are pursuing tertiary education and careers in STEM.

Young people around Cessnock and in the greater region have come to look at their futures differently, only recently an ex-student from the town’s indigenous community entered the Aerospace Engineering degree program at Newcastle University and another who had planned to be a beautician is now looking into becoming a pilot after her team had a successful experience with the F1 in Schools competition.

She was part of Australia’s first all-girl Aboriginal team in F1 in Schools and mentored by Boeing engineers they designed, built and raced a miniature Formula One car and won four awards at the national level.

“You can’t be what you can’t see,” he says, and the foundation of his work is exposure, getting industry involved in school programs and giving kids an early start on the skills they’ll need to join a high-tech workforce, expanding their experience and raising what they expect of themselves.

“We’re taking young people and showing them a world beyond their local community and what the jobs in the local community that they are not aware of, we’re trying to educate them as to the job trends, and getting them involved in the subjects and learning the skill sets that industry are after.”

Sleap comes from the Hunter which has informed the programs he’s been creating, he was the first in his family to go to university and definitely the first to complete a doctorate in engineering and publish.

The STEM programs Sleap has created began with the ME Program that was established in partnership with Regional Development Australia – Hunter  funded by the Department of Defence. Whilst the Director of the ME Program Sleap further developed his iSTEM curriculum that was designed for Year 9 and 10 students and has been so successful that it was rolled out to over 300 schools across NSW.

“iSTEM has been the catalyst for the whole movement in school curriculum because it was informed by industry, we met with industry partners and said to them ‘what skills do you need?’”

After a time working with Regional Development Australia, Sleap felt that he wanted to return to the classroom which resulted in the creation of The Cessnock Academy of STEM Excellence (CASE) which has been another success.

CASE has engaged students’ interest in STEM, cut suspension rates and lifted attendance. In the Academy’s second year in 2019, the Academy model was delivered in 65 schools in five regional centres across NSW, resulting in a swag of student awards.

“Through consulting widely with industry I was able to create this system of industry interaction, we’re expanding the curriculum from pre-school through high school and looking at the transition into work, university and TAFE,” he says.

Students love the subjects on offer at CASE and the classroom teaching is the polar opposite of chalk and talk. The students collaborate on solving a problem in teams with the teacher as the facilitator and often representatives from industry will visit to consult with the students on problems they’ve run into.

“Chalk and talk is not how we operate, the rooms are noisy, they’re active, they’re working on equipment that you would potentially see in industry, 3D printers, design software, we have robotics systems, we use laser cutters. The students actively work on solving a problem and there is a whole range of problems that they work on, they’re very collaborative in what they do, it’s noisy but productive noisy.

“We also might have an industry representative come in and talk to the students about what they do or have a mentor in from the likes of Boeing that will work with the students to help them solve a problem or give them a skillset like how to use CAD software. We also encourage students to go out on excursions to see what happens in say the medical industry or advanced manufacturing or agriculture so they get an idea of the different types of jobs that are out there.

“I found that if the kids engage and they love what they do you don't have to teach them, they teach themselves.”

The ball keeps rolling, the success of CASE will now, hopefully, be emulated across the state with the STEM Industry School Partnership, SISP.

“We have no issue in recruiting industry, they want to be part of the solution but they really don't know how, so the CASE program has now expanded into a new program called SISP. We have set this up all over NSW so these skill sets can be built in students, the bigger the scale, the more interested industry have become.

“The schools that were involved in iSTEM saw a 19 per cent uptick in the number of students continuing with STEM over a six- or seven-year period in the Hunter, with the SISP program we’re looking to recreate those numbers across the whole of the state.

“According to PWC, if we can convert just 1 per cent of our workforce into STEM it's a $52.7 billion outcome,” Sleap says.