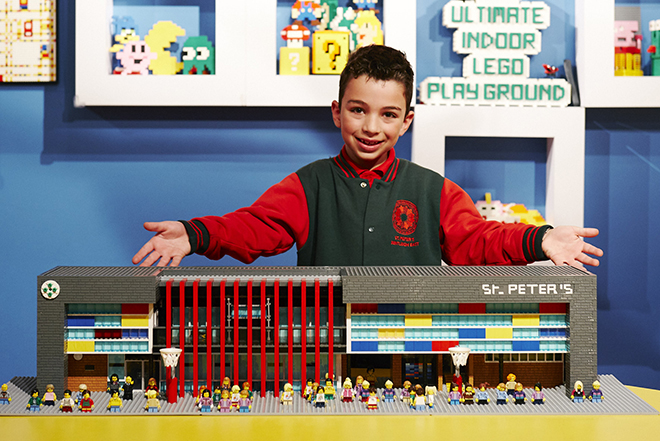 Jake Baratta, age 8, from St. Peter’s Primary School won the exclusive opportunity to have his school built from LEGO after winning Legolan's school design competition with his colourful 3D model made from cardboard, icy pole sticks, pipe cleaners and polystyrene.

Jake and 80 of his classmates got a sneak peek at the LEGO model of the school before it’s publicly showcased at Legoland Discovery Centre.

“I was excited to win the competition and was very happy to see my model of St Peter’s constructed out of LEGO because I am a huge LEGO fan! It was really special to share this prize with my great school and with all my grade 2 friends and teachers. I am so thankful to David Holder, Legoland's Master Builder, for building such an awesome model and for this whole LEGO adventure,” said Jake.

According to David Holder, “Our school design competition challenged school students to develop an interpretive design of their school in any medium such as drawing, painting, model, sculpture or digital design. I was looking for a combination of creativity, artistic interpretation and how much effort was put into the entry – Jake’s submissions had high levels of all of these,”

“The construction of the LEGO replica of St. Peter’s Primary School took 5 hours to design, 25 hours to construct and is made up of 5,600 LEGO bricks. It will be displayed in our retail store temporarily before we hand it over to the school for permanent ownership.”

Following the unveiling, Jake and his classmates took part in interactive school workshops run by the centre’s
Master Builders.