A suite of apps used by over 25,000 Australian educators could be a winner for preschoolers with language difficulties. 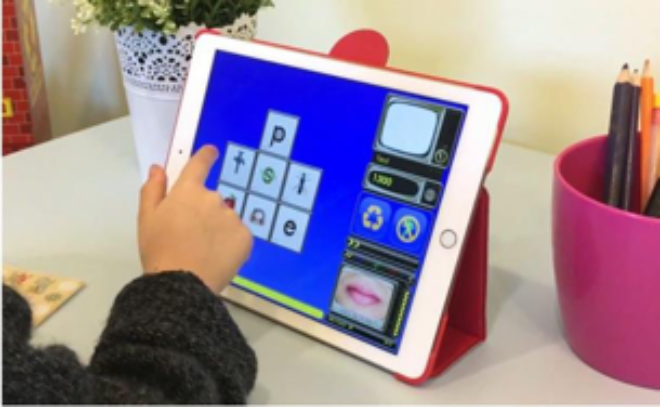 A suite of apps used by over 25,000 Australian educators could be a winner for preschoolers with language difficulties.

A pilot study, published in the International Journal of Speech-Language Pathology, looked at whether using a particular set of touch-screen phonics apps over eight weeks helped four-year olds with developmental language disorder to improve their pre-reading skills.

The 14 children using the apps showed major improvements in key abilities compared to the 10 who continued with their 'business as usual' education. Their improvements were in phoneme blending, phoneme segmentation, and letter-sound knowledge: skills that are major predictors of how well children learn to read in their first 2 years of schooling.

The lead author, Dr Karyn Carson of Flinders University, declared no conflict of interest, and emphasised that she is independent from Reading Doctor®, the business making the set of apps.

Until now, said Carson, there were no independent studies published on whether the set of apps was effective. This is a major issue when it comes to education apps: there are over 200,000 education apps available for Apple iPads alone, many of them targeted at preschoolers, yet most of them have not been independently assessed.

In her view, “it is the job of the scientific community to support educators and parents in differentiating which apps value-add and have proven research effectiveness and which apps do not.

“Despite the large number of education apps available, researchers have indicated that many apps that focus on supporting early reading skills lack several important design features,” she said.

“Such features include a clear link with the child’s early literacy curriculum, highly interactive and multi-sensory features, the ability to build on children’s prior knowledge, linking children to print and symbols on the screen to construct meaning, ensuring tasks are understandable, provision of clear feedback, enabling of peer collaboration and a method of scaffolding to progress a child’s ability.”

In a previous study, for instance, researchers assessed the quality of 132 apps. Of these, said the authors, “None were of excellent quality. Twenty-five were of good quality, 105 average and 2 were poor or very poor.”

Given the present study’s small sample size, said Carson, its findings are not definitive, but are very promising all the same, pointing to the importance of further research. “Follow-up data has been collected and will be published at a later date,” she noted..

"Further research is also being conducted at Flinders University to evaluate the effect of these apps for 5-year-old children in their first year at school with and without risks for reading problems.”

If apps like the ones examined in this study are indeed effective, she said, they could help ensure that children at risk for reading problems are taught evidence-based skills such as phonemic awareness and phonics.

Karyn Carson. (2019). ‘Can an App a Day Keep Illiteracy Away? Piloting the Efficacy of Reading Doctor® Apps for Preschoolers with Developmental Language Disorder’, International Journal of Speech-Language Pathology. ?https://www.tandfonline.com/doi/full/10.1080/17549507.2019.1667438