Party Higher is a national wireless headphone entertainment company and the only silent disco company in Australia that specialises in silent disco for children and youth. 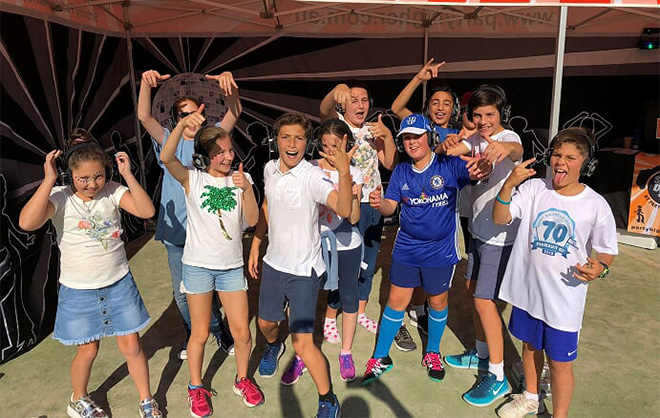 Party Higher is a national wireless headphone entertainment company and the only silent disco company in Australia that specialises in silent disco for children and youth.

The company has been around nearly 10 years, starting out with silent children’s parties which were very successful. Children in attendance were completely engaged and left feeling valued and uplifted.

Director, Paul Rosenberg identified the great outcomes this could have for children at school. Party Higher’s school incursions have been developed by honing the silent disco entertainment programs through feedback from participants, and via collaborating with educational experts. There are now seven different silent disco incursions to select from which have been mapped to the Australian curriculum standard.

At a silent disco event, everyone wears their own pair of high quality wireless headphones, which light up. Whilst tuned into kid safe music a professionally trained facilitator will conduct games and activities. These headsets are comfortable and kept at a safe, adjustable volume.

The popularity for silent disco incursions in the last few years has soared, given the effectiveness of this technology delivering school curriculum outcomes, under the guise of a fun and motivating event. Special interest groups and schools with children on the autism spectrum can make use of this technology easily too.

Party Higher events create a visual spectacle, with lights, lasers and special effects, and encourage interaction between students and positively impact student wellbeing and school culture. Their events also limit noise pollution, as you can choose to do an event inside a classroom, hall or outside in a courtyard without disturbing neighbours or other classrooms.

Having worked with so many children and young people, the company is well aware of how critical whole school well being programs are in seeking to address the multitude of issues facing children and youth.

The development of the various types of silent disco incursions has largely been a passion project, aiming to help children have fun and connect and experience something unique and unforgettable. The range of seven different types of silent school incursions all include music, fun, movement and games and include a Silent Disco Dance party, Hip Hop dancing, Music Art and Dance, 3B Sports, Drama Sport, Multicultural Games and the resilience and confidence boosting new Silent Superhero Incursion.

For young people who are in secondary school, Party Higher provides three channels of safe school friendly music, which students can switch between themselves – these events for end of term, special days or fetes and fundraisers give tweens and teens the chance to let off steam and connect in a fun and safe environment.