Turning an interest into further study. 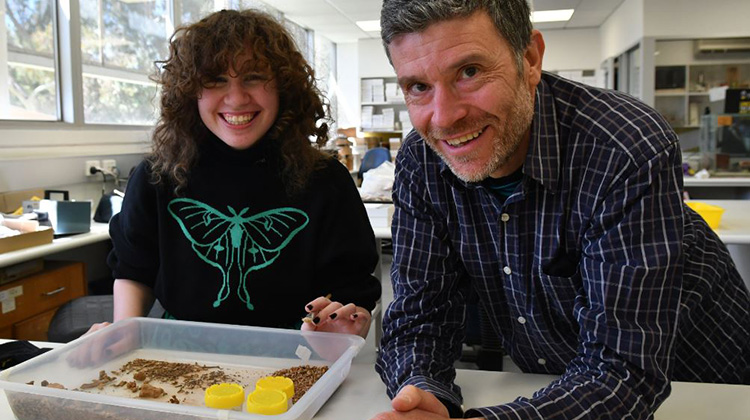 The bones of a career.

Sophie Field’s interest in palaeontology has been noticed and encouraged by Flinders Uni.

A prize-winning Year 12 student, Field went on a Flinders University fossil expedition to the Naracoorte Caves and says she will take the opportunity to study palaeontology at university.

The Reynella East High School student joined the second year Bachelor of Science (Palaeontology) field trip to the World Heritage Listed Naracoorte Caves, while Toby Wheaton from Kingscote Area School on Kangaroo Island will also have an opportunity to visit the Flinders Palaeontology Lab next year.

The two students were the 2021 recipients of the James Moore Memorial Fund, a commemorative scholarship program established for former palaeontology student James Moore which enables a metropolitan and rural high school student to participate in an expedition with Flinders palaeontologists and to help curate fossils from the expedition in the Flinders Palaeontology Laboratory.

Professor Gavin Prideaux, director of research at the Flinders Palaeontology Lab, says the success of the excursion to Naracoorte Caves this year, which featured 35 participants, underlines the growing demand and interest in Palaeontology at Flinders.

Sophie says the field trip experience was an eye-opener and she has applied to study a Bachelor of Arts at Flinders University next year, taking History and Archaeology, but is now keen to also include studies in palaeontology.

“It was such a new experience for me. I loved sorting the bones and being in the caves – it was so much fun – and I’d never previously thought much about studying palaeontology as a specific subject, but now I’m really keen,” says Sophie.

The James Moore Memorial Fund was established in 2015 to honour the memory of former Flinders University palaeontology student, James Moore. Originally from Whyalla, James devoted his university study to learning about the remains of prehistoric animals, including ancient megafauna of Australia, at the Flinders Palaeontology Laboratory.