No failure learning in military instruction

Because failure to learn may have dire consequences for military students, the American Department of the Army (1954) firmly asserts: “if a student failed to learn, the instructor failed to teach” (p. 5). Whew! That puts a different spin on our teaching doesn’t it?
Blair Johns, Teacher, Dr Neil MacNeill, Principal, Ellenbrook Primary School 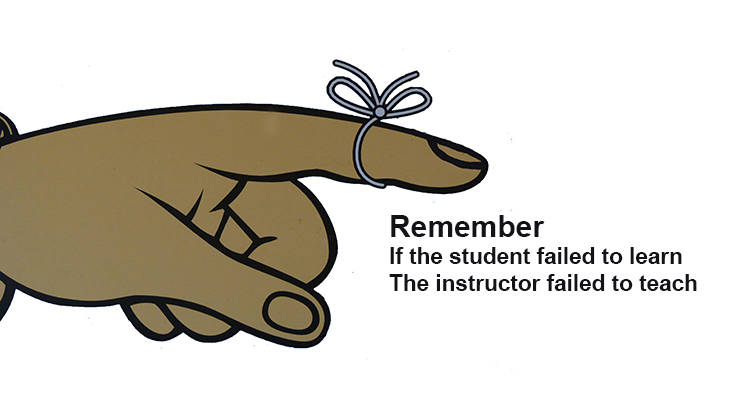 Because failure to learn may have dire consequences for military students, the American Department of the Army (1954) firmly asserts: “if a student failed to learn, the instructor failed to teach” (p. 5). Whew! That puts a different spin on our teaching doesn’t it?

The Australian Army takes teaching and the curriculum very seriously also, and every soldier attaining the rank of Corporal is required to pass courses on military instruction. A colleague noted that he had learned more about teaching and learning completing his Corporal Course than he did during teacher training at university.

The Australian Army text, “Land Warfare Procedures G-7-1-2: The Instructor’s Handbook” (2017) is a manual that clearly sets out lesson planning, lesson delivery, and lesson assessment. While teachers in schools use the acronym EDI for Explicit Direct Instruction, the Army has used this acronym for many years as Explain, Demonstrate, and Imitate, which is a variation on: I do; we do; you do.

Blair Johns, an Army veteran, explains how he would have taught longitude and latitude to troops in his infantry class, and his own Year 6 class using the Military Instruction model.

Objectives
The students will be able to:

ACARA Reference
The geographical diversity of the Asia region and the location of its major countries in relation to Australia (ACHASSK138).

Motivation
Watch the video “The Warship and the Lighthouse”.

Introduction
Greeting – ensure all students have the required materials.

Statement of relevance
The reason you are taught this is because longitude and latitude are the universal way in which the world accurately plots exact locations on the globe.

Statement of objective
By the end of this lesson you will be able to:

Stage 1
What are lines of longitude and latitude?

(TP1) Explain that lines of longitude and latitude are imaginary lines placed across the globe forming a grid.

(TP3) The lines that run vertically around the globe are called lines of longitude. They are also called meridians. The Prime Meridian located at Greenwich, in England is marked as the 0 point of longitude. It divides the globe into eastern and western hemispheres. Longitude lines to the east of the Prime meridian are referred to as east longitude and lines to the west are referred to as west longitude. The total value is 180 degrees east and 180 degrees west.

Ask students to locate the equator and mark its value on their maps. Indicate with fingers a line of north latitude/south latitude.

Ask the students to locate the Prime meridian and mark its value (0) on their maps. Indicate with fingers, lines of east and west longitude.

Students to answer the following on their boards:

Define a line of longitude? Runs vertically around the globe from PM.

Is the equator an example of longitude or latitude? Latitude.

Longitude: Imaginary lines that start from the PM and run vertically around the globe.

Latitude: Imaginary lines that start from the equator and run horizontally around the globe.

Explanation
(TP4) As previously stated, longitude and latitude are used to locate exact locations on the globe. We will now use this information to locate countries on a world map.

Coordinates are given in the following format:

To find a location we read the degrees for the latitude. Starting from the equator we move south or east to the latitude given. If it is between the lines we divide the lines further equally. We then read what hemisphere the longitude is in and identify the degree of longitude.

Demonstration
Demonstrate on the map. Talk aloud during the process, reinforcing the teaching points.

Imitation
(IP) Guide the students through finding the location of the Maldives using 3 degrees North latitude, 73 degrees East longitude (Maldives). Ensure each student indicates with their finger each line of longitude or latitude. Provide corrections as required.

It is noticeable that the level of instructor direction is reduced as students correctly apply their learning.

Move around the room providing individual feedback to students.

Objective one
Explain in your own words the difference between lines of longitude and latitude.

Objective two
Identify the following places on your world map and colouring them in the corresponding colour.

Summary
Give praise to class and indicate the degree to which they have worked.

The class is now able to explain the difference between longitude and latitude and how to apply this to identify countries on the globe.

Statement of relevance
The reason you have been taught this is because longitude and latitude are the universal way in which the world accurately plots exact locations on the globe. They are still commonly used in GPS systems, by pilots, cartographers, sailors and travelers to identify their exact locations.

Main points to remember
Lines of longitude are the imaginary lines that run vertically (North to South) around the globe.

Lines of latitude are the imaginary lines that run horizontally (East to West around the globe.

Longitude and latitude are used to accurately identify positions on the globe.

We read the latitude first and then the longitude.

Preview
The next lesson on this subject will be next week where you will apply your understanding of longitude and latitude further and record coordinates for a location.

Dismissal
While many teachers would claim to teach a lesson sequence in a similar manner, military instructors do not take short-cuts or vary the lesson presentation. Each military teaching lesson always takes exactly the same, semi-scripted format, and the students expect this approach. Secondly, the points that Blair makes in a lesson about supervision and formative assessment are important. During the lesson the Instructor constantly checks for understanding and this is known by the acronym CFU- check for understanding. The CFU is done in a manner that all teachers use- careful observation of the class; watch students whom you think will have problems; and, in a more formal sense, ask if anyone has a question. Thirdly, these lessons are based on what Gagne (1979, p. 7) calls the “time tested learning principles” of contiguity, repetition, and reinforcement.

with the Elements of Explicit Instruction
In the semi-scripted Military Instruction Model, as demonstrated in the Longitude and Latitude lesson shown above, it is often difficult to imagine the human movement and presence of the instructor and so readers may not see the linkages to explicit instruction. With this in mind, it was interesting to examine the Military Instructor’s lesson against the Archer and Hughes’s (2011, pp. 2-3) 16 Elements of Explicit Instruction and show the high levels of compatibility.

Table 1. Comparison of the 16 Elements of Explicit Instruction with a Typical Military Instruction (Theory) Lesson.

Conclusions
In many cases, the formal, teaching craft lessons were lost during the 1970s when teacher training became teacher education and transferred from Teachers Colleges to universities. As a result, preservice teachers are often less prepared for classroom experiences when they first appear in schools, and they are then exposed to a hodgepodge of often conflicting, site-specific advice from classroom teachers. Explicit Direct Instruction is currently being reborn as teachers realise the moral imperative of No Failure Learning, and making certain that all students are given the basic tools of learning. We can see that Military Instruction is a useful variant of explicit instruction that gives teachers a base model on which to build their teaching and learning programs.

The Battleship versus the Lighthouse. Retrieved from: https://www.youtube.com/watch?v=Knu14TlvCQE