There was huge demand for Kalgoorlie girls’ mining camp with more events planned for later in the year. 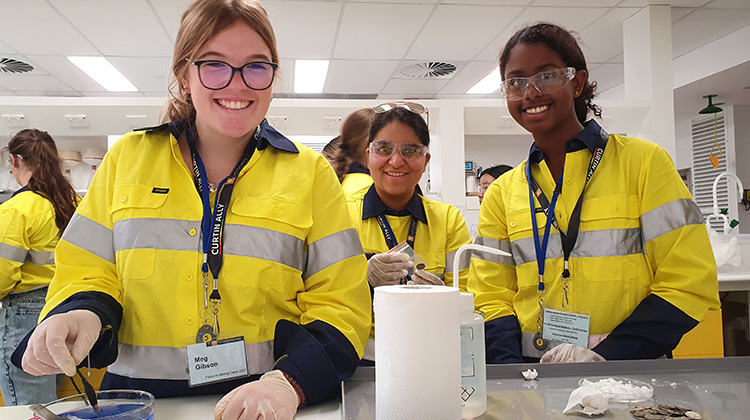 Many career paths available in mining

If mining is supposed to be a bit blokey someone forgot to tell the record number of secondary school girls from across WA who attended the WA School of Mines, Curtin Kalgoorlie’s annual Girls’ Focus on Mining Camp.

The five-day residential camp ran from January 18–22 and was attended by 48 students from schools in Perth and regional WA, which is twice the number of previous camp attendees; numbers were expanded due to demand.

Curtin Kalgoorlie is an example of how education can work closely with industry to turn out the type of graduates that industry wants; trained well and work ready.

The idea is to bring the girls to Kalgoorlie, which is on the doorstep of Curtin’s teaching facility and show them how the town, the industry and the university work together.

“It gives them an oversight and overview of different mining careers and the various types of people that work in the mining industry. Clearly there is a perception out there that that mining is only for blokes and that’s far from the case,” says Kalgoorlie Campus Director Sabina Shugg.

“They get to meet and talk to real life women working in the industry and see the variety of jobs that they could do. Here at WA School of Mines we teach mining engineering and metallurgical engineering and surveying and geology, they’re our prime focus but many of the girls were interested in other engineering courses. There was interest in the environmental courses and even a couple of astrophysicists.”

Currently in WA, around 20 per cent of the industry is made up of women and in some companies the percentage of females in the workforce is much higher than that.

“We’re working on our work integration focus, because we are on the doorstep of industry we can have regular interaction. We continually have people coming to campus, people going to industry and we work with industry to get input into what we are teaching.

“We want the right outcomes for the graduates, making them job ready and making sure that their capabilities are aligned with what industry wants. We are also working on giving the students lots of transferrable skills in technology and information.”

The attendees visited the KCGM Super Pit one of the country’s biggest open cut gold mines which has yielded around 58 million ounces of gold to date, the BHP Nickel West Smelter, Kanowna Belle Gold Mine, Museum of the Goldfields and engaged in a range of activities on campus and in the community.

“The girls were awestruck when they went almost a kilometer underground and when they were looking at some of the rocks with the geologists,” Shugg says.

Students attending the university can expect to be quickly integrated into the Kalgoorlie community and given jobs so there is the opportunity to earn when they’re learning.

Due to high demand for the camp, a further 24 female secondary school students attended a day-trip to a mine site and refinery in Boddington in WA’s South West on January 21. Further camps are planned for later in the year for both genders.