Many flubs before a touchdown in a performance career 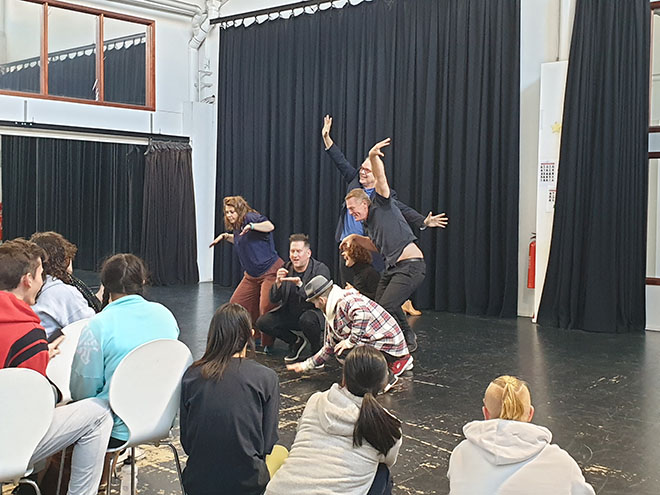 They say the best way to get ahead is to surround yourself with good people, and for the crowd at performing arts program Wakakirri’s Careers Day, that was certainly the case. Students had the opportunity to meet with and pick the brains of some of Australia’s best and brightest in the performing arts.

Wakakirri continues to win the patronage of and very precious time from Australia’s performing arts community who recognise the opportunity that the program represents. Wakakirri’s national Story-Dance Challenge provides an accessible opportunity for schools at all levels to engage with the arts and perform on professional stages, and the annual Careers Day was an opportunity for secondary students to further explore career pathways in the arts and entertainment industry.

Held at Jason Coleman’s vast, light filled dance academy, The Ministry of Dance in North Melbourne (which is worth a look if you want to witness a buzzing, creative atmosphere) the full day event led with a Q&A with a panel that have seen and done it all in performing arts and led into hands-on performance workshops with them. Not bad for a free event.

One very old head present was Mark Holden of “Touchdown!” fame. There was a kind of symmetry here; the students gathered were just embarking on their arts journey while Holden’s is drawing to an end after some 40 years in entertainment, including four top 20 hit singles in the 70s. He’s spent the past decade concentrating on his career as a barrister.

But Holden did take the opportunity to offer up some sage advice about how to progress in the very competitive arts area; try to enjoy the journey as much as possible, take time to find out what you’re good at and that there’s a number of ways to have a long and fulfilling career around performance, not necessarily just as a lead player.

“What is music, what is dance? It’s not like building a road or a house it’s mystical, magical and gorgeous and I cannot believe the tiny, weeny talent that I had let me have the career I did.

“There were people in my life like Prince who was an absolute genius. I competed in a world with someone like Prince and I don't have his talent, I don't have a thousandth of his talent and yet from your age onwards I was putting my hands on a piano that I never learned to play.

“But I just put my hands on that piano and tried to figure out what sounded good to me and started to make up songs that weren’t very good. But it’s the doing of it, it’s not the awards, it’s the actual joy of dancing if you’re a dancer, the joy of putting paint in canvas if you’re painter,” Holden said.

What was pressed home by the panel is that performing arts will give you plenty of opportunity to experience rejection and to make mistakes, good thing that there is magic to be found in failure.

Chris Horsey has had a long career in dance and he’s now a prominent director and choreographer, he admits a lot of his dance steps and choreography have evolved out of mistakes.

“In rehearsal I will often see someone making a mistake, turning the wrong way and it looks so much better, I’ll then make everyone do the same move, and that’s why I always say there is magic in mistakes and the rehearsal room is the right place to make mistakes.

“So let’s make them, let’s make really big, bold confident mistakes, which sounds ridiculous, but with conviction and confidence you can find the magic,” he said.

Entries for Wakakirri’s 2019 Secondary and Primary Story-Dance Challenges have now closed, however teachers and principals from interested schools are invited to contact Wakakirri about complimentary tickets to shows and backstage tours at a theatre near you. Email [email protected] for details. Entries for Wakakirri’s Screen Challenge remain open until August, see wakakirri.com for information.