Learning Maths while having fun

Matific was designed to teach mathematics in a fun, engaging way. Fun, but not so fun that there’s no learning being achieved. Research conducted by the UWS indicates that Results improved by 34% when using Matific. 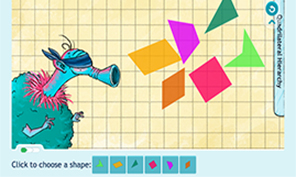 Matific was designed to teach mathematics in a fun, engaging way. Fun, but not so fun that there’s no learning being achieved.

The online K–6 maths teaching program uses hands on interactive games - episodes - based on a progressive spiral learning system and mapped to curricula to introduce fundamental mathematical concepts. The idea is that students enjoy themselves while receiving a good grounding in the subject.

Matific’s intention is that the kids come to like maths rather than being intimidated by it, hopefully an attitude which will be carried into senior school and further. That’s a good thing given Australia’s rapid descent of the international maths teaching league tables, maths participation for Year 12 last year was at an all-time low.

Teacher Educator Brent Hughes from Matific says; “We want maths education to not only be fun but to be achievable. All of our activities are based on the idea that rather than have children practice things they already know how to do, we want them, through games and situations, to apply maths concepts and through that process achieve learning.

“If we can do it in a way that is engaging and fun then we’re ticking off a few boxes at the same time.”

There are a few hurdles that each of the games must pass before they’re ready for use on the website, foremost each has to be aligned to a curriculum outcome.

“We look at the Australian curriculum or the New South Wales or Victorian curriculum and look at what the teachers are expected to teach because if it’s not based on that then it’s pointless. We want to make Matific really relevant to the teachers and align with something that the children are going to be doing in the classroom anyway.”

Matific think about a real-life situation that they can replicate with an activity or a game. Once a game has been developed the company makes sure that the children who will be using it are able to identify that it is a mathematics game and not a lark.

“We don’t make them too gamey, we don't want to get to where the children are playing it and they are not able to actually see the mathematics that are involved. One of the things we always do is question the kids when they’re playing the game, if they say ‘I’m learning about addition’ or ‘I’m practicing addition’ then they’re identifying the maths and we know we’ve pitched it at the right level.

“If they say ‘I’m playing the game with the monsters’ they’re finding it engaging but it’s not mathematical enough, they’re not seeing the maths involved. That’s a big thing for us, yes we want to make maths more enjoyable but we also want children to actually learn,” Hughes says.

“Games are great but we leave that to EA sports, they’re really good at it, we’re an education resource.”

Matific tests its product using its extensive user base, each new activity or game is given to a class to play with and Matific bases developments on the feedback provided.

“The teachers and students really love being involved in the process, we want to make our client base feel like a genuine community where their opinions are valued. Teachers are the most valuable resource, if we can help them to feel empowered in what we’re doing, then everybody wins.”

Many of the staff at Matific have an education background which allows them to put on their teacher’s hat and look at the resources from that perspective. Hughes is a primary school teacher by trade as is his mother.

“We’re not business people trying to think about what is happening in the classroom.”

When getting Matific running, typically a teacher will choose a game which aligns with a topic that is being covered.

“Say a class is learning about time, they’ll have a discussion and then the students will go back to their tables and play a game around the subject. They’ll then come back and discuss what they’ve learned. Teachers also often put up Matific on the interactive whiteboard or apple TV and the kids will work together on it in class which promotes mathematical talk and peer to peer evaluation.”

Hughes says that teachers report students talking about the games they played in Matific and that it provides teaching metaphors and increased recall of what the students were exposed to using the resource.

“Instead of attempting to have students recall a worksheet they completed weeks ago they can ask students to recall, for instance, a game they played where they put up a fence to learn about perimeters,” Hughes says.

Having a good attitude about maths as the students enter high school is essential to their continuing with the subject through to Year 12.

“Maths gets very abstract very quickly in high school, we think that giving students a positive attitude towards maths and a solid grounding in the subject will encourage them to stay with it, if they don’t enjoy maths far too many say ‘no I’m out’ at that stage.”

Research conducted by the University of Western Sydney indicates that the program does improve maths learning. Results improved by 34% when using Matific and the research indicated that students liked and were engaged with the program. Matific has hundreds of activities and resources for teachers to use, and is available in over 45 countries and 26 languages

Behind Matific
There are some very heavy hitters behind Matific, the founders include Leon Kamenev who started online businesses Myrate and Menulog, Professor of Mathematics Raz Kupferman, renowned developer Shmulik Kupferman and educator Shimon Shocken. All are fathers.