If you want a career in digital illustration go south 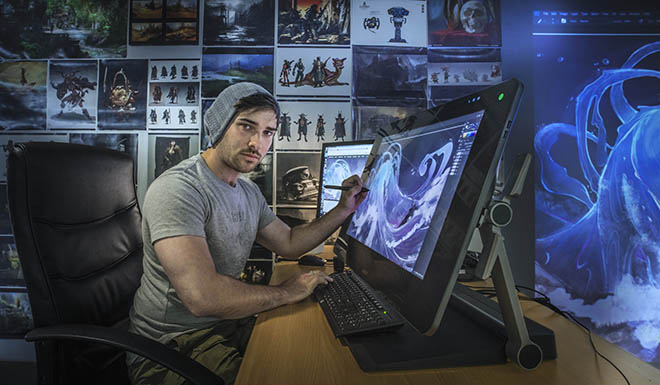 The Rookies competition attracts leading multi-media schools from all over the world. For the third year running, the Flinders University / CDW Studios collaboration has been named a top 10 ‘Best Concept Art and Illustration School’, the only Australian institute to make the category.

The VFX industry is burgeoning and local companies are increasingly employing graduates, amid growing opportunities with global majors such as Technicolor – which recently established an Adelaide office.

Anthony Robinson completed his degree this July and has already clocked up a four-month stint with Warner Brothers, story boarding for the movie Mortal Kombat. A freelancer, he says the blend of academic and practical work through the Flinders University CDW Studios collaboration developed his skills and professional practice to the point of being able to compete competitively for studio projects.

“As a result, I was fortunate to receive a full-time position as a storyboard artist on Mortal Kombat during the pre-production stage. Now I am progressing towards my goal of creating a studio here in South Australia “We are delighted to be in The Rookies top ten for the third year running,” says Katie Cavanagh, course coordinator for Flinders’ Bachelor of Creative Arts, Visual Effects and Entertainment Design.

“Winning School of the Year for digital illustration in both 2017 and 2018 was amazing in this fiercely competitive contest and we continue to score at the very top, with elite digital art and illustration schools from around the world.”

CDW Studios founder Simon Scales says: “Students who are studying the bachelor’s degree are of a truly international standard and the work they have been producing during the degree is absolutely outstanding.”

“Confirmation of the quality of students work has been shown with a number of students and graduates hired at AAA studios around the globe over the last six to 12 months. Ubisoft, Rising Sun Pictures, Mill Film, Ready at Dawn and Bungie just to name a few,” he says.

Students are taught by industry professionals including Scales, who has continued his work for the Lego group and video game companies alongside teaching, while global VFX heavyweights are brought in for the course’s legendary masterclasses – names like Eytan Zana, Darren Quach and Carlo Arellano.

Associate Professor Jason Bevan will join the faculty in 2020, relocating from China where he leads visual effects courses at Xi'an Jiaotong-Liverpool University. An expert in motion design, animation, digital film-making and visual effects, he established a glowing industry reputation prior to his academic career. Graduates from his courses have worked on major productions that include Avengers End Game, Inception, Wonder Woman and Harry Potter and the Deathly Hallows.

“Like all Flinders degrees, VFX students can incorporate entrepreneurial topics that have been designed by our world-leading entrepreneurial hub, the New Venture Institute,” Cavanagh says. “This can be valuable particularly given creatives often work as freelancers, contracting on games or films.”