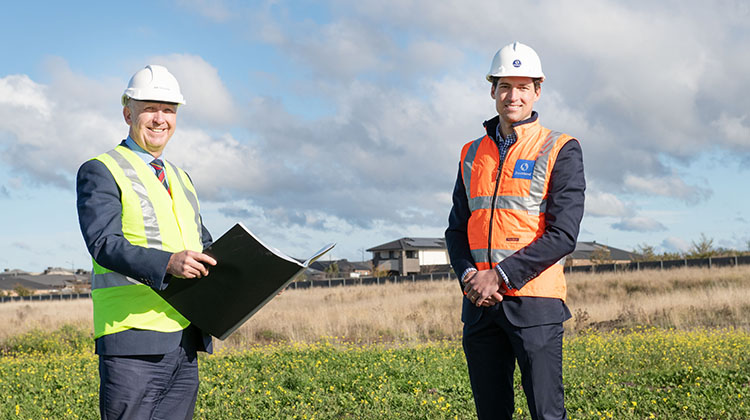 The urban fringe in Melbourne is rapidly becoming urban.

Melbourne is growing. Octopian corridors of new development are reaching further and further north, east and west, and it is happening fast with the city soon expected to overtake Sydney in becoming Australia’s most populous.

Communities appearing on what used to be the rural urban fringe are a work in progress and require infrastructure if they are to really sing; transport, shops, schools and a common idea of how the place functions and the feelings it evokes.

Hume Anglican Grammar was established in 2008 by St Peter’s Church and a group of passionate local parents who saw a need for an additional school in their area. Fast forward 13 years and those needs seem to have been met, as the school grows in lockstep with its region’s own rapid expansion.

The school currently has two Prep to Year 12 campuses, and recently announced the establishment of its third site, a new Prep to Year 6 campus located in Stockland’s Cloverton residential community in the suburb of Kalkallo. The first stage of construction is due for completion by the end of 2022 and the school is set to officially open its doors at the beginning of the 2023 school year.

Hume Anglican Grammar’s existing campuses are in nearby Donnybrook (located within Mirvac’s Olivine Estate) and Mickleham (known as the Mt Ridley Campus and occupying a picturesque 10 hectare site atop of Mt Ridley).

Hume has experienced impressive growth across a 13-year period since its foundation. Its mantra – providing an affordable private education committed to educational excellence and student wellbeing – has played a significant factor in contributing to the school’s success and growth.

Fees are reasonable, a Year 12 education costs approximately $8,000 per annum, comparing favourably to fellow private educational institutions where tuition can reach the significantly higher figures of up to $30,000 and beyond. The introduction of the new Kalkallo Campus is expected to appeal to younger families, typically first home buyers, who have bought into the area and are seeking primary education for their children.

Hume Anglican Grammar has a strong relationship with both Stockland and Mirvac, residential developers who view quality educational offerings as a linchpin in attracting home buyers to their developments. These partnerships are crucial in ensuring the long-term sustainability of the school, which grows and matures in step with the local community.

“These companies are truly engaged in their community, they remain well beyond the completion of their masterplan, and are invested in making their estates strong and vibrant. We share the same values, and stive to make our communities flourish,” says Hume Anglican Grammar Principal, Mr Bill Sweeney.

“Stockland and Mirvac have a very similar approach, we all have the same goal, and it is this strong connection that makes us successful.  There is much they do for the school, and likewise there is much we do to enhance the amenities of the estates. It’s great working with them – indeed a true partnership,” Mr Sweeney says.

The school’s new development, located within Stockland’s Cloverton Estate approximately 35km from Melbourne’s CBD, is situated across three hectares and will comprise of four learning neighbourhoods in addition to specialist teaching and learning facilities, allowing for a broad curricular and co-curricular offering to all students across Prep to Year 6.

“We anticipate that one learning neighbourhood will be rolled out a year, that’s the plan but if enrolments are positive, this may well be accelerated.”

The campus will have a regulation sized soccer pitch, a number of playgrounds and play spaces, active and passive spaces, cricket nets, an administration block which will house the library, offices and staffrooms and a single court gymnasium with a canteen.

Mr Sweeney says, “We will do this in six stages and it is intended a stage rolls out each year. The reaction to date indicates that this program is well on track. Indeed, the interest received so far has exceeded our expectations. We are very optimistic.”

“Pleasingly, we will be schooling the first classes of Kalkallo students next year, where they will be accommodated at the neighbouring Donnybrook site whilst their campus is under construction. Then, in 2023 they will move across to their brand-new school.”

Upon completion of Year 6 at the new campus, all enrolled students will be able to continue their secondary education at either Mt Ridley or Donnybrook. No additional applications will be required and students’ transition into Year 7 will follow the same programs as those students at the school’s P–12 counterparts.

“Each of our campuses spring from a similar model, so we are very much one school on three sites. What’s being taught at Mt Ridley is being taught at Donnybrook and will be taught at Kalkallo. Our school’s values, policies, tuition fees, curriculum, co-curricular program, and pastoral care structures remain the same.”

The school is looking forward to this new journey with great excitement but also acknowledges the work that lays ahead in maintaining its high standards and ensuring that growth is well managed.

“Nine out of ten Year 7 students will have come directly from the Hume Anglican Grammar Primary schools, with the tenth joining us from external Primary schools. Having said that, we are certainly on a growth trajectory and there will be other possibilities for expansion no doubt,” Mr Sweeney says.