Higher education graduates across Australia have found it harder to gain employment over the last 12 months and it wasn’t just about COVID. 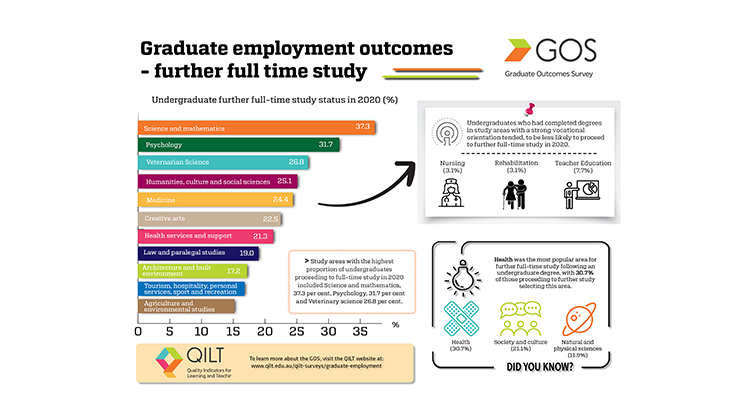 A bit harder this year

Higher education graduates across Australia have found it harder to gain employment in over the last 12 months and it wasn’t just about COVID.

There was a drop in the November and February employment rate pointing to a softening of the labour market for graduates prior to the pandemic but there was a big drop during May when COVID hit.

The new 2020 Graduate Outcomes Survey (GOS) report shows that employment outcomes for The GOS forms part of the Quality Indicators for Learning and Teaching (QILT) survey suite administered by the Social Research Centre for the Australian Government Department of Education Skills and Employment.

There were increases in annual full-time salaries across both undergraduate and postgraduate streams. The median annual salary of undergraduates employed full-time in 2020 was $64,700, which was an increase of $2,100 compared with a median salary of $62,600 recorded the previous year.

Median salaries of undergraduates working full-time in most study areas have still increased since 2019 regardless of the impact of COVID-19 on their actual hours of employment, but this may be because figures are based on those usually employed full-time and based on their annual salaries.

As in previous years, the report shows that graduates with more generalist degrees can take longer to gain a foothold in the labour market immediately upon graduation. Study areas with the lowest rates of full-time employment in 2020 were Creative arts, Tourism, hospitality, personal services, sport and recreation and communications. Graduates who studied externally or were older, were more likely to be employed full-time than those who studied on-campus by 12.6 percentage points, probably because they were already connected with the labour market prior to completing their course.

Domestic graduates whose home language was not English had substantially lower rates of full-time employment with 52.9 per cent compared with 69.2 per cent for those whose home language was English, a gap of 16.3 percentage points.  This trend has persisted since 2016 when the GOS was first implemented.  Undergraduates with a stated disability were also less likely to be in full-time work with a 10.2 percentage point difference in full-time employment rate.