Getting through to neurodiverse students.
Dr Matthew Harrison and Jess Rowlings, Melbourne Graduate School of Education 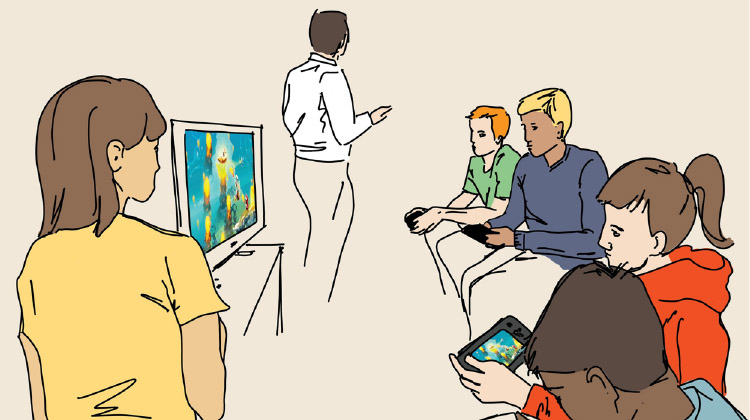 Over the past decade there has been a significant shift in how we understand conditions such as autism and attention deficit hyperactivity disorder (ADHD). While once seen primarily as deficits to fix for our children and young adults to lead happy lives, many now understand the differences manifesting from these conditions as components that are inherently part of the person. This neurological variation is referred to as neurodiversity. While this term has been used in academic circles since the late 1990s, it is increasingly being used in schools and settings across Australia. Progressive parents, teachers, allied health professionals, and school leaders are interested in how they can implement strength and interest-based programs to ensure that every student can be safe, happy, and learning in their community.

We have seen the importance of interest-based programs firsthand through our wealth of experiences, both professional and personal. As a teacher, Matt worked with neurodiverse kids both in mainstream and specialist schools. Teaching in Australia, South Korea, and the United Kingdom, it soon became apparent to him that there was a global problem with what was being offered to support neurodiverse students. Social skills programs were often focused on ‘making neurodiverse kids fit in’ rather than providing them with the self-confidence to be themselves and build connections through their interests. Likewise, as a Speech and Language Pathologist, Jess saw the resistance that many children expressed towards traditional social skills interventions that were based on what the therapist or parent thought the child should be interested in, rather than the reality. If an autistic child or young adult is into video games, why try and use basketball as a tool for building social capacity? Together we set about fixing this oversight.

In founding Next Level Collaboration we had three main goals. First, we wanted to set up a research-based social capacity building program for neurodiverse children and young adults that uses cooperative video games as a space for learning. Using Matt’s PhD research as a basis, we developed and refined a structured three-stage program that draws on the latest research of video review and digital games-based intervention. Second, we wanted to provide opportunities for neurodiverse young adults, who disproportionately experience unemployment or underemployment. To address this, we have a mission to ensure that every one of our programs is facilitated by at least one person with lived experiences of neurodiversity. This benefits everyone, but especially the children with which we work. Our neurodiverse facilitators often have an intimate understanding of the difference between intervening on someone, and intervening with someone’s consent. Third, we wanted to create community of neurodiverse gamers. This last goal has occurred organically, but as families have heard about Next Level Collaboration, we have brought together people of all ages and backgrounds who are neurodiverse and share a love of video games, and the special moments that can be shared through gaming.

At Next Level Collaboration, we work with children who have a diverse range of needs and varying experiences at school and home. One of our participants, Link, had moved schools multiple times due to ongoing challenges in the school environment, and was at risk of disengagement. His family reported that he experienced high levels of anxiety and had not enjoyed previous social skills programs that he attended, generally leaving the program within a few weeks. Link had a strong interest in gaming and was excited to attend a program based on his interests. He was enthusiastic to share his knowledge of his favourite games with the group, however Link became extremely frustrated if other participants did not listen to him or wanted to do something different to him. For the other group members, this could be very overwhelming as Link often shouted at them or refused to participate in team gameplay.

Although this was the longest period for which Link had participated in a social capacity building program, his expressions of distress became challenging for other participants, particularly in relation to the sensory environment. As a result, we developed an alternative program structure for Link, where he worked with his family rather than his peers. A stronger focus on relationship building, gameplay, and fun allowed Link to connect with his family, while avoiding frustration. For Link’s family, it was incredibly valuable to spend positive time together through building on Link’s strengths and area of interest.

Since founding Next Level Collaboration, we have employed several neurodiverse staff members including young adults to help facilitate our sessions. Samus was a gamer herself with a background in psychology, and had previously worked with neurodiverse children and adolescents. Initially, we supported Samus to develop her understanding of the Next Level Collaboration program and modelled skills for effective session facilitation. As Samus developed familiarity with the children and her confidence grew, we provided her with supported opportunities to work autonomously. Providing a supportive employment environment involves more than fair pay, as important as that is given that neurodiverse people have historically been economically exploited. It was important for us to work with Samus to manage her own neurodiverse needs. She told us early on that she works best in a quieter environment. Given that we were playing exciting video games, this meant that we needed to factor in regular breaks in action so that Samus could have a ‘time out’ from the potentially overwhelming auditory environment.  It was also important for us to value Samus’s own special interest and knowledge in gaming, using her expertise to help discussions and allowing her to share her experiences with the participants.

Our learnings so far from Next Level Collaboration provided strong guidance for our next steps, including development of an online adaptation of our program to launch in 2022. We have also developed a neurodiverse-friendly training program to support new program staff, and are investigating further research to evaluate the impact of the Next Level Collaboration program. We look forward to further expanding on not only our research base and neurodiverse-led programs, but also our social mission to provide meaningful opportunities for the neurodiverse community.

View the program via: https://www.youtube.com/watch?v=NEQJAB1hTVk

Matthew and Jess will be presenting about this topic at the Diverse Learners Symposium, 17 & 18 June 2022 at the Melbourne Convention & Exhibition Centre