In 1961, John F Kennedy announced a goal for humans to walk on the moon. At about the same time, an industrialist called Henry Kremer announced a series of prizes worth $2.5m in today’s dollars, for a seemingly more modest goal: to fly under human power, over the English Channel. 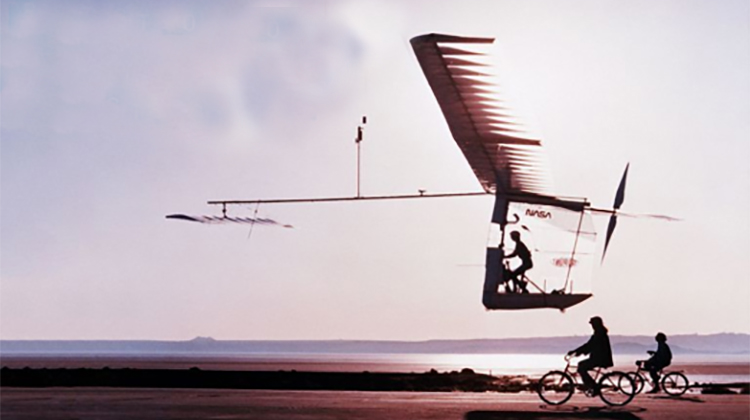 In 1961, John F Kennedy announced a goal for humans to walk on the moon. At about the same time, an industrialist called Henry Kremer announced a series of prizes worth $2.5m in today’s dollars, for a seemingly more modest goal: to fly under human power, over the English Channel.

Fast forward a little over 10 years and teams were still stuck on the wrong side of the water, and stuck on an annual cycle of design-build-crash. They were smart, dedicated experts but they failed continually.

Over that same decade six separate missions successfully walked on the moon. But it took another eight years of swimming in the Channel before Paul MacCready changed the game. His insight was simple; he designed an aircraft that was easy to reassemble after it crashed. This reduced the time between test-flights from a year, to hours. And in the time that his competitors could make one test flight, he could make 1000. Within a short time of his decision to compete, he had won all the prizes, and stayed dry.

How did he achieve it?  Flight is easy to understand in theory:  lift + thrust = weight + drag.  But in practice, crossing the channel remained out-of-reach until MacCready transformed test flights from a rare, high-stakes, summative event, into a cadence that was frequent, familiar, and formative.

And the same approach can be applied to education.

“The ingredients of a healthy school are also easy to recognise in theory,” says Dr Joe Thurbon CTO at Educator Impact. “But in practice, they can be harder to marshal than crossing the channel – and they are certainly more important.

“Transforming a school into a ‘healthy school’ is implicit in the ubiquitous ‘School Improvement Plan’ but the data principals have is incomplete, difficult to obtain, or out-of-date.

“Educator Impact believes that transforming the measurement of school health into something that is frequent, familiar and formative will lead to a radical improvement in outcomes and assist principals in transforming their school.”

The research is clear, he says. Student and staff wellbeing are both vitally important – and they also have a huge impact on one another. Further, measuring student wellbeing should be not only comprehensive, but also regular and individualised. So, why is it so often measured with annual, anonymous surveys?

The answer is, of course, that it’s hard to measure something as comprehensive as student wellbeing in a way that is simple enough to be frequent, and individualised enough to be formative.

“Educator Impact has a system that lets schools collect data that has all three properties,” Joe Thurbon says. “It works by asking a small number of questions regularly so schools can quickly build and maintain an up-to-date picture of:

“Our Pulse program comprehensively measures wellbeing and engagement against best-practice frameworks, while being frequent enough to use as a leading indicator, and individualised enough to use formatively.

“It measures your school’s overall health – the wellbeing and engagement of your students, staff and parents. And like all of our programs, it is safe, simple and easy to use.”