Developing Inviting Schools: A Beneficial Framework for Teaching and Leading

Purkey, now in his 90s, may yet have more books in him; however, whether he does or not, this book may very well be his magnum opus.
Reviewed by John J. Ivers, Brigham Young University Idaho 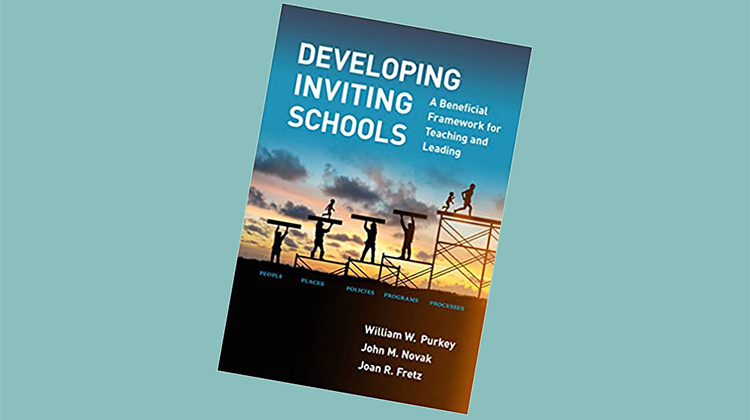 The latest book in Purkey's body of work.

The book Developing Inviting Schools: A Beneficial Framework for Teaching and Leading is the culmination of over one hundred years of aggregate experience of three highly influential educators. The third author, Joan Fretz, is a highly sought-after presenter and expert on issues of school climate. The first two authors, William W. Purkey and John Novak have been publishing powerhouses on educational issues since the 80s and show no signs of letting up. As evidence of their longevity in the field, I am approaching retirement, and, as a young man in college, I used a textbook jointly authored by both of them. Purkey, now in his 90s, may yet have more books in him; however, whether he does or not, this book may very well be his magnum opus as it seems to sum up, and bulk up, all he has been advocating over the decades.

The authors remind us, as some of us may have forgotten, that school can be a painful place, where assaults on young people’s fragile self-concepts lurk in every hallway or behind many classroom doors. All of us can recall personal instances of teacher or peer-induced shame encountered within the walls of an institution that supposedly existed to uplift rather than degrade. Although teaching one’s subject matter is important, the authors stress that addressing emotional toxicity in schools should never be far from our thinking and our teaching, for that issue dovetails into all aspects of one’s educational experience, and, if unaddressed, can leave permanent scars. A lot of our K–12 experiences never quite leave us, and their subtle, almost imperceptible whisperings never cease.

To better confront these ubiquitous issues, the book espouses what the authors call Invitational Theory. Invitational Theory, in a nutshell, simply proposes that if one makes the school ambience inviting for both teachers and pupils, the enormous potential of both can be maximized and, in turn, problems of low performance and disruptive behavior can be minimized. The authors, to their credit, do not portray Invitational Theory as a panacea for all ills. Poor performance and bad behavior will always be with us; however, with a lot of considerable research and experience to back it up, they make the case, and make it rather well, that an inviting environment, properly and intentionally instituted, can ameliorate many problems. 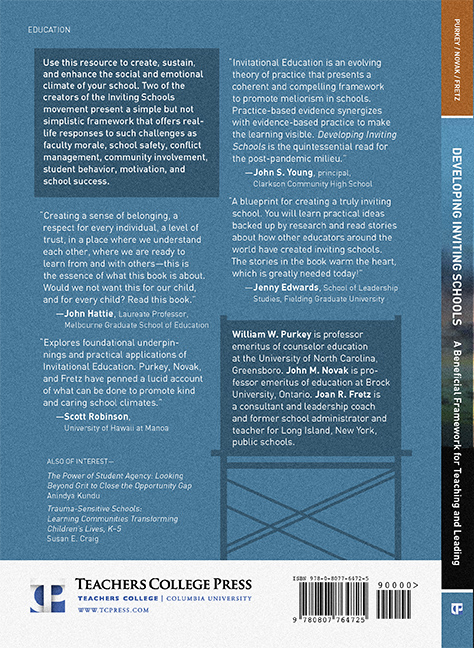 In their approach to confronting issues of student performance, the authors are all devotees of The Perceptual Tradition and Self-Concept Theory. They embrace the notion that a teacher should not simply address the way things really are, but rather he or she should also attend to how the students perceive things are. If capable students perceive themselves as inherently incapable, their propensity to achieve will be highly compromised. If inherently good kids perceive themselves as bad, they will play that role worthy of an Oscar. Affording students (and teachers for that matter) the opportunity to see themselves, and their potential, in a truer and more positive light is not easy, and a good part of the book is dedicated to the sensitivities and complications inherent in such a process.

Toward the end, the book spells out a specific program an institution can follow to facilitate the acquisition of its invitational goals. However, the authors, rather refreshingly, do not insist on its exact, step-by-step implementation. Invitational Education emphasizes the “democratic ethos” where people are respected as capable to make their own decisions based upon a clear understanding of their situations. School leaders, teachers, and even school staff (which are not overlooked in the book) are free to implement the principles in ways that agree with their particular personalities, talents, and circumstances.

Of course, many potential readers may feel that they are part of the “choir,” so to speak, and only teachers and administrators who are “uninviting” need to read the book. I, being a long-term member of an organization that promotes the principles of Invitational Education, found the read to not only bolster my already extant thinking, but also served to expand it in ways I could not have predicted. Also, a good “preaching to the choir” might just inspire and instruct the members sing more knowledgeably, resolutely, and beautifully.

Unlike many reads in education, I found this book to possess a propensity to maintain one’s attention. It is well-written and replete with interesting and engaging anecdotes and stories that serve to drive home the point. Purkey, in all his works, demonstrates understanding of the ancient, primeval art of storytelling and its efficaciousness in assisting the reader in permanently acquiring the points within. Toward the end, the authors spell out, in considerable detail, how one can best implement an effective culture change within one’s institution. However, as in the rest of the book, such changes are not insisted upon, but rather are there for our professional consideration.

Not only does the book promote the need for inviting schools, but also, inadvertently maybe, it is a treatise on effective leadership and overall good living. As a former college dean, I tried to utilize the principles of Invitational Education (having learned them from other books by Purkey, Novak, and others) which, in my opinion, served to significantly facilitate positive relationships between me and faculty members. In short, I do not think one can lose with this work, as it should be an inviting experience to the reader both personally and professionally.

About the author
John J. Ivers, EdD ([email protected]) is a Professor of Languages & International Studies at Brigham Young University Idaho. He has taught in both the public schools and at the university level for 38 years and is a former college dean.