Beyond the bedtime story

A good way to get kids reading and writing and loving books is the tried and true bed time story, but there is more that can be done. Underlying behaviour is very important and self regulation is the most essential skill for kids to have. 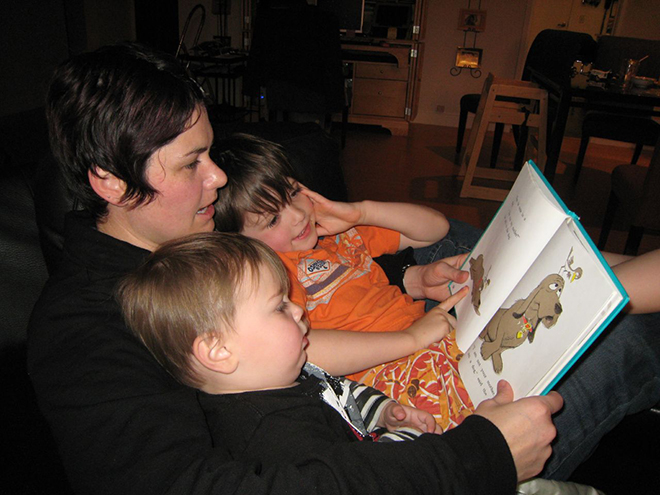 A good way to get children reading and writing and loving books is the tried and true bed time story, but there is more that can be done.

A child's ability to self-regulate i.e. pay attention, retain memory of what’s been taught and perhaps inhibit behaviours are critical for their success in literacy and language development.

"Self-regulation is an umbrella term to define children's abilities to keep information in their working memories, pay attention to tasks and even to inhibit behaviors that might prevent them from accomplishing tasks," said Lori Skibbe, Associate Professor in the Human Development and Family Studies Department from Michigan State University.

Children who could self-regulate earlier had higher language and learning skills through at least second grade.

"We've known that there is a relationship between self-regulation and language and literacy, but our work shows that there is a lasting impact. The early advantage of self-regulation means children are learning these critical language and literacy skills earlier and faster, which sets the stage for developing additional skills earlier as well," Skibbe said.

The research team assessed 351 children twice a year from preschool to second grade, on both self-regulation and on language and literacy.

When assessing self-regulation, the children were asked to play a game that required them to follow prompts from the researchers.

"We asked them to touch their heads, shoulders, knees and toes, similar to the childhood 'Simon Says' game," Skibbe said. "Then, we reversed or mixed the commands to see who could follow based on the instructions they retained."

The researchers looked at four language and literacy skills: comprehension; vocabulary; early decoding, or the ability to identify letters of the alphabet and read short words; and phonological awareness, or understanding the sound structure of language.

Some children are biologically predisposed to develop self-regulation skills earlier, Skibbe said, but there are things parents can do to help them in their development.

"By nature, humans are not effective multitaskers, and children need time where they focus on only one thing," she said.

"Parents need to be aware of how their children can regulate their own behavior based on what's going on around them. Parents can structure their home environment and routines in ways that support children," Skibbe said. A full night of sleep, playing games with children and having time without distractions in the background are things you might not think help language and literacy development, but they do."