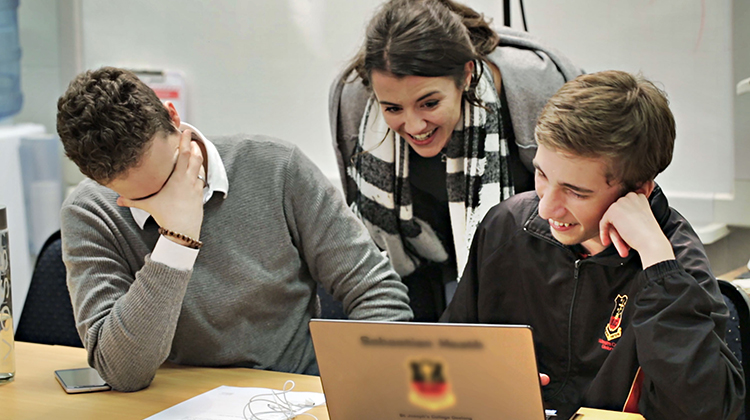 Enter The Lab, a national network of after-school technology clubs for 10–16 year-old autistic young people. There are over 30 Labs around Australia, as well as a range of online Lab sessions delivered via Zoom (something that has kept Labs going during the recent COVID-19 lockdowns). They celebrated 10 years of operation in November.

At each weekly two-hour Lab session, two or more computer programmers and designers work one-on-one with between 10 and 15 young people (or 6–8 online) to develop their social and technology skills.

They provide an environment where participants can share their interests in a wide variety of activities such as gaming, video creation and sharing, graphic design, programming and game development. Mentors are available during Lab sessions to support activities or to work with participants on new projects of interest to them.

“We’ve found that some of the most useful things learned by participants during Lab sessions are social and personal skills. This includes learning about how to work with others, how to make friends and how to interact socially, as well as simply feeling accepted and valued by peers with common interests. The Lab is about technology skills too, but typically the programming and design skills come a little later once participants have settled in. This can take a little time and one of the essential aspects of The Lab is that kids find their own place and in their own time,” says co-founder Dr Stefan Schutt.

“We take an unstructured approach so every session can be different. We want participants to undertake activities because it interests them, not because they have to. This approach is deliberately unlike school and is based on our experience with hundreds of young people. The Lab is designed to be a cool and accepting place to visit, hang out and learn while having fun.

The Lab started with a 2009-2010 VicHealth funded research project, Connected Lives, that looked into the possibilities of using technology to improve the wellbeing of young people living with multiple forms of disadvantage. This project was awarded the national B/HERT Award for Community Engagement in 2010.

Co-founder Dale Linegar, a software developer, and Schutt who is a community technology researcher and educator, found that one-on-one technology tuition worked particularly well with autistic young people. At the same time, Dale’s consultancy Oztron needed a space to run the business.

In late 2010, after wandering around the inner-western Melbourne suburb of Footscray looking for a suitable cheap space, the founders stumbled across Trocadero, a former cinema turned into artist studio. They scrounged free and cheap furniture from Gumtree and Victoria University where Schutt was working. Dale and the mentors spent weekends doing up the space and turning it into a welcoming 'den' for young people. In that space, Oztron’s developers worked on software projects during the day, then with Lab participants after school.

The inspiration for this dual-purpose space came from writer and social activist Dave Eggers’ 826 Valencia Project, (http://826valencia.org/), which began by renting a cheap shopfront in a (then) poor San Francisco district and co-locating Eggers’ McSweeney’s literary magazine with an after-school literacy drop in centre.

“We were also influenced by educational research that highlighted the importance of focused, meaningful activities that deploy digital technology to build on the interests of young people.”

Once they started at Trocadero in early 2011, word of mouth and media articles spread the message, and The Lab soon found itself with a long waiting list, even after expanding its number of weekly sessions. Other people became interested in running their own Labs using the (now-proven) model, which was also externally evaluated in 2013. With support from the Young and Well Cooperative Research Centre and local funding led to the formation of a national network of Labs.

“After the Young and Well funding ran out in late 2012, we had to work out how to become sustainable. Up to then, sessions were free, but we realised to pay mentors (a core principle of the Lab) and keep the Lab going, we needed to charge for sessions. We were conscious though that autism is an industry with families often paying through the nose to get the best they could for their children.

“We decided that we wanted to keep the Lab as cheap as possible (at the time, $20 per session) – and have been running off the smell of an oily rag since then, with occasional topping up through grants. That model has since proved itself given that the Lab is still around ten years later. Just before COVID hit, we were fortunate to secure funding from Gandel Philanthropy and Equity Trustees. This has filled the gap while face to face Labs haven't been able to run,” Schutt says.

“In 2013, Dale and I were no longer able to run the growing network of Labs ourselves. A group of us then set up a not for profit company and board to run what is now The Lab Network, which supports local groups to start and run their own Labs.”

The Lab has developed a pack of resources for individuals and organisations who would like to start a Lab, including documents, agreements and a range of videos. A good starting point is the Starting a Lab section of the Lab website: https://thelab.org.au/starting-a-lab/

“Our national coordinator Alan also works closely with local groups as they investigate possibilities for starting a local Lab. As part of this, we have developed specific resources on training mentors, in recognition that mentors are core to the success of Labs: https://thelab.org.au/mentor-resources/.”

The materials and technology used depends on the Lab and the interest of the young people. There are some basic core requirements for Lab spaces, which are usually donated or hired cheaply: the ability for participants to move around, and good internet, the rest is up to the Lab, the mentors and the participants. Some have laptops or games devices to borrow – most though are supplied by participants. In terms of software, it varies a lot.

There are video tutorials that cover a wide range of technologies here: https://thelab.org.au/resources/tutorial/

Participants have created all kinds of things, from apps to sophisticated games to YouTube channels outlining 'QuickDraw' techniques for drawing animated characters. This video, produced for the recent Games for Change Asia Pacific festival, has the participants themselves talking about some of these projects: https://www.youtube.com/watch?v=K4viKiWNNvY

Some projects are ongoing and others have bene developed for special events like the PAX gaming conference. For PAX, participants created two games specifically for the international Games expo. One was a platform game based on exploring the physical space at PAX and the other an almost fully functioning battle royale style game featuring cars with special mechanics to do battle on the racetrack. The video above has more details on these projects.

Back in 2013, independent evaluation by Project Synthesis of the first Lab summarised the following benefits: "This evaluation clearly points to a range of benefits of The Lab for young people with Asperger’s Syndrome. The health and wellbeing of participants appears to have improved through participation in The Lab, as described by participants, parents and staff. The improvements relate to social engagement and activity including the development of friendships and overall happiness and motivation levels. Improvements in mental health, including the cessation of harmful behaviours and positive changes to medication management, were also found. Key impacts appear to be the development of technical skills alongside a heightened motivation to learn, a newfound appreciation for some participants of the importance of school, and the ability of some participants to envisage working in IT or computer programming in the future.

"Not only are these benefits remarkable in and of themselves, findings from this evaluation indicate that The Lab is unique for these participants: The Lab extends and engages participants more than any other setting or service they have attended, and certainly more than the traditional school model."

“We believe these outcomes have remained consistent since then, based on our interactions with and feedback from participants, mentors and parents. A forthcoming evaluation by the Olga Tennison Autism Research Centre will examine this in a more rigorous way. A 2019 PhD study about The Lab also confirmed these benefits, the PhD scholar and I have written an article about this here, which summarises some of the findings: https://theconversation.com/technology-as-a-social-lifeline-for-kids-with-aspergers-37852,” says Schutt.

It involves three competitive rooms with Minecraft, Rocket League and Super Smash Bros. Each will have a video stream on Discord (https://discord.com/) where spectators and participants can continue to view the games.