James Emmanuel was born and raised in Orange NSW to immigrant African and Sri Lankan parents so he was always going to stand out. That difference was never more stark than when it came to complying with his independent school’s uniform requirements. 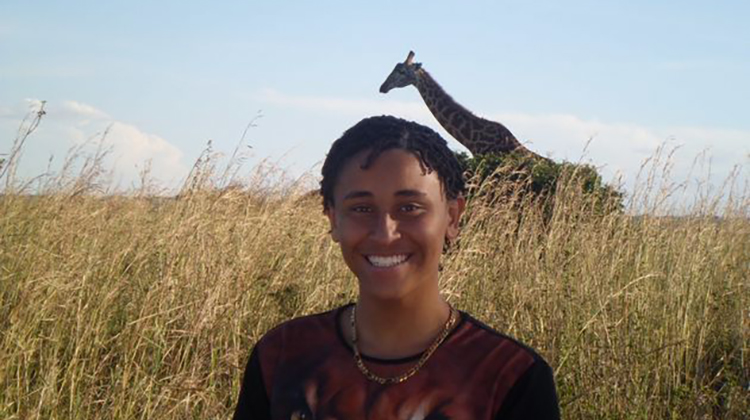 James Emmanuel was born and raised in Orange NSW to immigrant African and Sri Lankan parents so he was always going to stand out. That difference was never more stark than when it came to complying with his independent school’s uniform requirements.

Playing with your appearance is part of growing up and while his friends were able to push the boundaries a little with their hair styles, James found that there was very little leeway given to his own experiments.

He remembers one incident in Year 10 as being particularly jarring, when he returned to Orange from Kenya after visiting family.

“My hair had been braided for the first time ever (finally!). The protective style took five (painful) hours, as my hair was divided into small parts then twisted super hard to stop them unravelling. What resulted were small, pinky-sized braids that on paper, stuck to the school’s dress code: above the collar, above the ears, neat and sensible. However, my hair only survived a few days in regional NSW before I was reprimanded by the disciplinary teachers for having “an extreme hairstyle” that didn’t fit the school image.

“On top of that, throughout my high school years I was continually forced to shave off my Afro once it grew an inch or two and resembled the Afro shape that we all know. I would receive threats of after school detentions and the microaggressive racist discourse would begin. Teachers would scold my natural hair calling it “inappropriate”, “messy” implying that it’s unkempt, “not acceptable” and some reiterate “no extreme hairstyles”. An Afro isn’t a style. It’s a natural hair texture. The only way to make this all end was to “shave” my head to “a number 1 or 2”. In other words, Afros were ‘unconsciously’ banned too,” he says.

“The language used by teachers and students to describe and outlaw Afro-textured hair is most definitely emblematic of a wider racism issue within Australia.

“Reflecting on the behaviour of some of my past teachers, I can now see there was racial bias towards my natural hair and cultural identity. This bias may have likely been unconscious. Either way, these biases are extremely hard for students to challenge and shake off.

“The language and actions of my peers were also deeply problematic. Non-black students would touch my hair and I would continuously be othered and likened to a sheep. There were always ‘jokes’ from the farmers who wanted to bring their sheep shearers in to shave my hair. It is very dehumanising. Consequently, I believe children at all education levels (infants, primary and secondary) need some sort of school-based diversity education and awareness course.”

He says it was defeating being sternly forced to take out his braids, even though they complied with the uniform rules.

“I was young, and school was my world. So, there were feelings of rejection and repression because I looked up to these adults to accept me, thinking their values and beliefs were reflective of the real world.

“It was equally disheartening watching my non-Black male counterparts be afforded so many self-expressive styling options. From gel, through to undercuts, partings and miniature faux hawks – to name a small few.

“Looking back, there was a feeling of rebellion around having an Afro and wanting braids, that I shouldn’t have been made to feel. Having attitudes like this ground into you throughout your formative years as a culturally diverse person, has lasting psychological effect. To this day, I still have feelings of being different or not quite right.”

Emmanuel says this kind of treatment is far too common and students of the African diaspora are acclimatised to institutions policing their natural appearance. His campaign with Change.org to challenge these attitudes includes a proposed amendment to the Anti Discrimination Act.

“I have received countless messages from students who are relieved to see someone speaking out and challenging these grooming codes that force us to assimilate. In saying that, I have a real concern that Black male students are being conditioned into shaving off their Afros to meet white (subjective) standards of presentability.

“Surprisingly, Catholic schools seem to be the biggest culprits, based on all the students who have come forward to me since the campaign’s inception. Though I believe this could happen at any school: public, private or religious, it isn’t deterred by the obscurities of the Anti Discrimination Act. We must not forget the culturally diverse students in regional Australia, who are more vulnerable to these covert discriminations and being ‘othered’.”

Schools should be discouraged from discriminating against culturally diverse hair by way of uniform policies and grooming codes.

“We need explicit state-based legislation (ideally across the country) to ensure there are legal ramifications for schools whose uniform policies and grooming codes do not comply.

“Under my proposal, NSW’s Anti-Discriminaton Act 1977 must be amended to explicitly and clearly protect the identity of culturally diverse students from uniform policies and grooming codes that hinder their culture and identity. As of right now there is no real universal protection. The Anti Discrimination Act is incredibly complex and lacks clarity.”

He says change needs to happen at a government level so there are enforceable penalties for schools whose uniform policies continue to discriminate against culturally diverse students on the basis of hair.

“Without legal change, addressing these covert and historically unchecked discriminations within schools doesn’t work (in my experience) as kids rarely have the power to negotiate with their teachers to tangible change. Think of the First Generation Australians to immigrant parents who are more likely to be pressured into conforming as to not risk their child’s education.

“Recently, the NSW Education Minister, Sarah Mitchell’s office responded to our campaign which was a great symbol of the power of our campaign. However, I was disappointed when she simply says the power to make legal change lies with the NSW Attorney General and that there are already anti-discrimination laws in place. Unfortunately, these laws haven’t been enough in protecting me and many others. I hope she and Mark Speakman together work towards building a more inclusive environment in our schools,” he says.

James Emmanuel recently graduated from the University of Technology Sydney with a Bachelor of Communication. He is also a recording artist and instrumentalist (stage name JamarzOnmarz).