An Engine of Intentionality: How consciously informed agency defies the odds 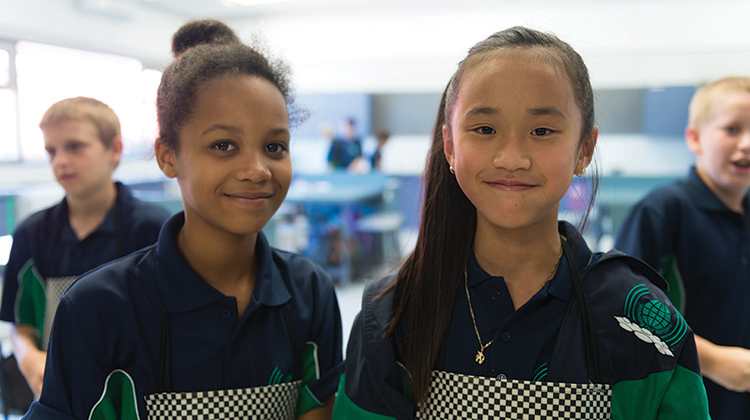 Socioeconomic disadvantage is identified as a large determining factor in the academic outcomes of students. Consequently, many come to the conclusion that this disadvantage is a cause to abandon the hope of any high-level academic success in disadvantaged schools, and that our effects are ultimately halted by factors out of our control.

Contemporary research such as John Hattie’s Visible Learning and William Purkey’s Invitational Education Theory form the lifeblood of decision making at Clarkson Community High School – a north metropolitan school in Perth with a low rating of socioeconomic advantage. It is argued that at the core of these informed decision-making processes is intentionality, and that a school structure underpinned by intentionality results in mitigated effects of socioeconomic disadvantage, as indicated by Clarkson’s achievements in high-stakes testing such as NAPLAN.

Introduction
John Hattie states in his Visible Learning series that socio-economic status (SES) has a high effect size in terms of determining student educational outcomes (Hattie, 2017) – the correlation between SES and educational outcomes have been detailed in much research (Lamb et al, 2015). Clarkson Community High School – a north metropolitan school in Perth – currently has an Index of Community Socio-Economic Advantage (ICSEA) of 962 (ACARA, 2016), indicating a disadvantageous socio-economic status. Despite the uphill battle that Clarkson has in areas such as meeting national benchmarks for standardised testing, Clarkson demonstrates a pattern of steady increase in academic achievement across all areas.

Through this article, I seek to explore the perceived causes of this high-achievement at Clarkson. In particular, I will argue that intentionality is the central pivot to a school founded on the framework of Invitational Educational Theory and informed by John Hattie’s Visible Learning.

Building on this idea, I seek to explore the following question:

How can a socioeconomically disadvantaged school such as Clarkson Community High School mitigate the perceived effects of disadvantage by being an “intentional school”?

Intentionality
The word ‘intentionality’ (from its root words ‘intentional’ and ‘intent’) refers to a mindset one takes when they make deliberate decisions for a reason. For the purposes of this article, the definition of ‘intentionality’ will be defined as such:  “a state of consciousness where actions have an aim in mind”. By acting with intention, we are acting based on some sort of impetus – a result that we want to see come to fruition – and we expect our actions to have some influence in obtaining our desired result. For us as educators, this impetus is to see our students achieve success – academically, socially, emotionally, etc.

Invitational Theory and Intentionality
Invitational Theory is a model of practice informed by facts, ideas and principles that seem to influence human success or failure. As summed up by its pioneer William Purkey, Invitational Theory “seeks to explain phenomena and provide a means of intentionally summoning people to realise their relatively boundless potential in all areas of worthwhile human endeavour” (Purkey & Novak, 1992). 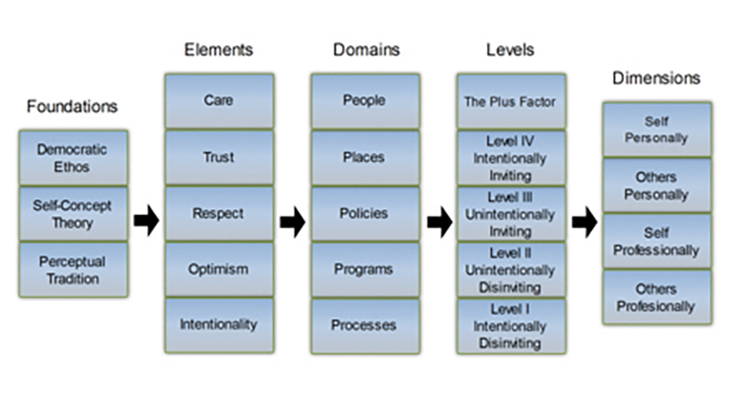 For simplicity and clarity, Invitational Theory is broken into sections (see Figure 1), and the five “elements” - intentionality, care, optimism, respect and trust are the beginning steps through which the theory starts to take shape (Purkey & Novak, 1992). For this reason, the elements are deemed the “key ingredients in moving from theory to practice”. The mnemonic which simplifies the elements, “I-CORT”, has “I” for “intentionality” listed first, which I suspect is no mere coincidence – nor is the fact that it features centrally in one of Purkey & Novak’s diagrams (see Figure 2 below). 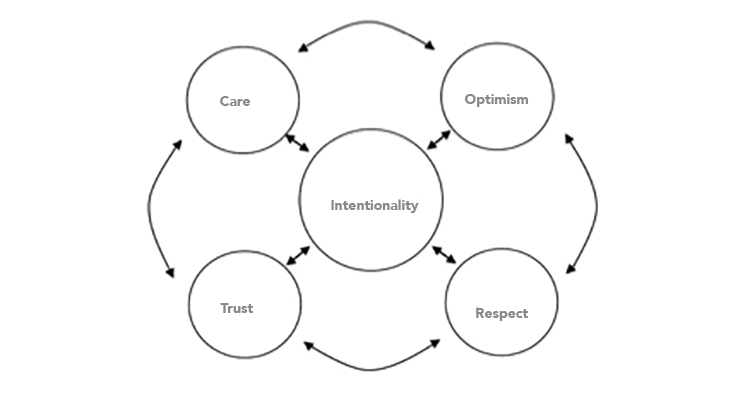 Intentionality features again in the “Levels” of Invitational Theory (refer back to Figure 1). One of the upper echelons of achievement in Invitational Theory mastery is to function “at the intentionally inviting level” (Purkey & Novak, 1992). To be invitational but not intentional in doing so is to have stumbled into success accidentally without being able to effectively explain why you are achieving the results that you are. Due to lacking intentionality despite achieving success in all four other elements, a teacher is bound to lack consistency and dependability in their actions. This is because there is no intellectual framework by which they can justify their good practice, nor is there a foundation by which they can build and improve on their actions, processes and policies.

Invitational Theory, with its model centred on intentionality, begs the question: what strategies or methodologies align with that of an intentional school? Clarkson Community High School has tackled this by having classroom and leadership decision-making processes based on contemporary education research literature. An example of such literature is non-other than the internationally acclaimed education professor on the cutting-edge of student achievement research – John Hattie.

Intentionally making learning visible
Professor John Hattie’s synthesis of hundreds of meta-analyses regarding student achievement took shape in the series of Visible Learning books, of which I have chosen to explore the most recent related to my context as a Head of Mathematics & Science – Visible Learning for Mathematics (Hattie, 2017). In the Visible Learning books, Hattie shares over 20 years of research evidence as to what impacts student learning the most. The reality is, we can all try something new – some things will not be effective, some things will be effective sometimes – but what is most likely to always be effective? Hattie summarises his research into a ranking based on “effect size”, which tells us ‘how much bang for our buck’ we are getting when we implement a new strategy. When Hattie is discussing what he and his co-authors believe the true purpose (or main aim) of education is, he says the following:

“We believe the true purpose of getting an education is to apprentice students into becoming their own teachers… Therefore, we must teach with intention, making sure that students acquire and consolidate the needed skills, processes and metacognitive awareness that make self-directed learning possible.” (Hattie, 2017, p176 – emphasis added)

So Hattie understands that for students to attain most desirable outcome, teachers need to act intentionally! We need to implement strategies based on a strong conviction of why – backed by research as to what is effective, and implemented based on our understanding of our students.

“How teachers think really matters. Making informed decisions about what actions to take based on evidence, should be the focus of professional learning sessions and grade-level or department conversations rather than admiring problems and blaming students or the conditions in which they live.” (Hattie, 2017, p. 231)

What does an “intentional school” look like, and how does this impact the school in terms of mitigating effects of disadvantage?
Clarkson Community High School is a school that is intentional in its decision making, and it is argued that this is the driving factor behind consistently high achievements that appear to (in part) defy expectations of achievement in high-stakes testing. In Table 2, some of the specific strategies in operation at Clarkson Community High School are explored, and referenced in correspondence with their perceived effect size as per Hattie’s Visible Learning research (Hattie, 2017).

In terms of how these strategies have translated into positive outcomes for learners at Clarkson Community High School, NAPLAN data for Year 9’s at CCHS have been tracked from 2011 to 2016. Year 9 has been chosen due to the breadth of data available, as well as its true reflection of the impact that Clarkson CHS as a sole agency has. In other words, Year 7 students would not demonstrate this effectively due to their limited time at the school, whereas a cohort in which most students have attended CCHS for more than a year are more likely to show the impact clearly.

What the data suggests is an incline of student marks over time in all areas of high-stakes testing. However, this could be to a variety of factors – of which, variation in SES within the catchment area could very well be one. To demonstrate the relationship between SES and results, a graph has been produced tracking the change in ICSEA over time alongside the average NAPLAN score of the school.

What we can see from Figure 4 is a steady incline of NAPLAN results alongside a steady increase of ICSEA. However, in 2016, we see something different – when the ICSEA score drops, we would expect results to drop too, but that is not the case. Removing 2016 from the data set, the correlation between ICSEA and NAPLAN scores is 0.95 – an extremely strong correlation. However, 2016’s data reduces correlation by defying expectations. This may suggest that Clarkson’s NAPLAN scores are on an upward trend irrespective of the SES of the school and its clientele.

Conclusion
A range of intentional strategies have been shared in line with Invitational Theory and Visible Learning that are in operation at Clarkson Community High School. These strategies are put in place as they are shown to improve academic outcomes at an accelerated rate compared to other options as per Hattie’s effect sizes.  Underpinning the implementation of these high-effect strategies are a team of senior leaders with sufficient vision and preparedness to try something different, showing initiative, commitment and bravery in their clear and consistent implementation of strategies.

Preliminary data shows that Clarkson’s educational outcomes are on a trend of steady growth, and there is a potential sign of results being in ignorance of socio-economic status. Research in further years will be able to further confirm or deny this theory, but for the foreseeable future, Clarkson Community High School will seek to be intentional in all that it does, selectively seizing opportunities with a goal in mind: to produce a school of high academic outcomes regardless of its socio-economic status.

Lamb, S, Jackson, J, Walstab, A and Huo, S (2015), Educational opportunity in Australia 2015: Who succeeds and who misses out, Centre for International Research on Education Systems, for the Mitchell Institute, Melbourne: Mitchell Institute.

This article was first published in Education Today Vol 17 (2).