ABC’s award-winning app was designed with kids, for kids

Australia’s No. 1 kids’ app with over one million monthly viewers, ABC Kids, was created through a highly collaborative process. 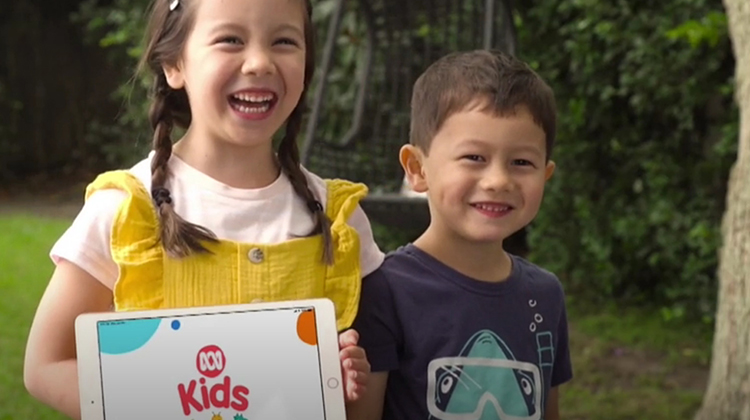 Kids want things that appeal to them but that doesn’t mean they have to be childish, that was the biggest take away from the process of redesigning the award-winning ABC Kids app.

It is now Australia’s No. 1 kids’ app with over one million monthly viewers, and content is carefully curated by experts, including early education specialists.

The ABC and strategic design studio, Future Friendly, worked on the app together and in less than 10 months came up with the new look which resulted in recognition from one of the oldest and most prestigious design awards in Australia; a Good Design Award in the Digital Apps and Software category.

The previous app, was seeing decreasing market share and engagement due to lack of input from both the children who would be using the app and the parents who oversee kids’ usage of the product who were naturally concerned about screen time.

Future Friendly designed a process to safely and effectively co-design the new app with kids across Australia. The app was tested with over 1,000 families to uncover insights that better connected Australia’s pre-school and younger school-aged children to their culture.

Senior Design Manager at the ABC, Mary-Claire Monsalve, said “The new ABC Kids app designed by Future Friendly delivers on the promises we made in 2019; to expand our audience, to be child-led, and to provide an experience that showcases our incredible content in the best way possible.”

Uncovering and meeting needs through inclusive design
Future Friendly thinks that when designing with potential users, it is critical to test reactions rather than ask for opinions, so the Future Friendly designers created and iterated a clickable prototype using the ABC’s live content feeds. This gave children the opportunity to genuinely experience the future app, rather than having to pretend what it might be like to use.

Contrary to some assumptions, kids don’t actually want childish design. A cleaner and more intuitive user experience ensured the app was simple to use for the pre-language stage, whilst also being inclusive of older kids’ behaviours and expectations.

We know that every child develops at a different rate; therefore, instead of being static, the solution was designed to grow alongside children. Content collections curated by early childhood experts were added through the design process, so kids can now find what’s right for them as they age – without removing parents’ ability to set limits on usage.

“Kids develop at different rates – so locking them into content by age can be detrimental to their growth,” says Yasin Masukor, Product Design Director, Future Friendly

Unusually, the app is also more than just video content. Kids don’t necessarily want to sit and watch passively, and parents don’t always want them to either, so the content offering was expanded to include follow-along craft tutorials and podcasts to spark the application of real-world knowledge.

Driving immediate progress and lasting impact
The impact of Future Friendly’s rigorous and inclusive design process has been both immediate and long lasting. Since launch, downloads are up 71 per cent, unique monthly users are up 13 per cent, and the app was awarded Apple App of the Day.

Co-founder of Future Friendly, Nick Gower, said “We delivered real change for kids, their parents, and the ABC. The new app reaffirmed their position as experts in kids’ entertainment – all while improving engagement, retention, and making it easier for kids to transition audiences to other ABC content as they grow up.”

Innovation and design crucial to improving education outcomes
Demand for digital services in early learning and education sectors was already on the rise in recent years, with institutions occasionally struggling to keep up with the momentum.

Now that the pandemic has further accelerated the adoption of digital technology across the sector, the imperative is to put children, students, and teachers at the centre of the design process when creating new products or transforming existing services.