Using social robots to teach people with ASD to identify the subtleties of communication and respond appropriately is effective in treating the disorder. 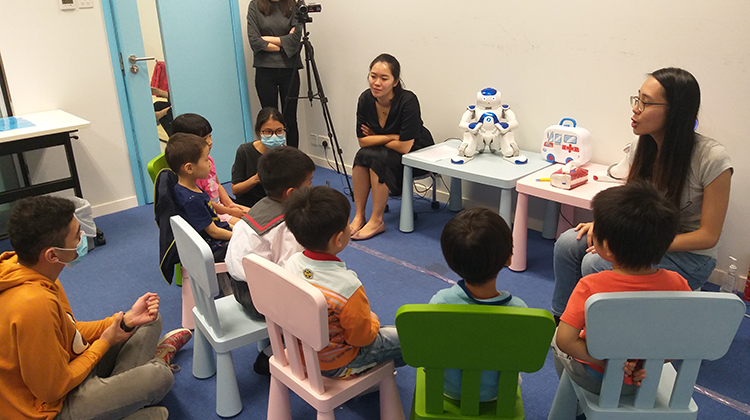 Human communication is complex, there’s a blizzard of gestures, inferences and cues that people learn to identify and react to while talking, however, those on the autism spectrum aren’t very good at it.

The variability in how we talk to each other is confusing for sufferers of autism and research has found that using social robots to teach people with the condition to identify the subtleties of communication and respond appropriately is effective in treating the disorder.

Unlike humans, robots operate within predictable and lawful systems, they can offer human-like social cues, be programmed so information can be repeated in the same format and are predictable and controllable, providing clear, structured information.

There’s also an environmental and emotional benefit, “These children do not need to consider socio-emotional expectations when interacting with robots, thereby reducing their social anxiety,” says Prof So Wing-Chee from the Chinese University of Hong Kong who has developed the Robot for Autism Behavioral Intervention (RABI) curriculum to treat children with ASD.

RABI was developed from the application of two ideas, The Intense World Theory and The Social Motivation Theory of Autism which suggest that individuals with ASD have excessive reactivity due to a particular form of brain hypertrophy and have deficits in communications with humans.

By deploying social robots, Prof So found that autism severity is reduced and social and behavioral function of 3–18-year-olds with autism increased.

“The findings generated from the pretest-posttest designs supported the effectiveness of RABI, thereby providing an alternative to conventional intervention where human teachers or therapists play the sole or significant role,” Prof So says.

Around 2000 preschool children are diagnosed with ASD every year. Since 2015, RABI has provided training in a range of social and behavioral skills, including self-care and conversation, and vocational skills for more than 1000 3–18-year-olds with ASD in Hong Kong and Macau.

The RABI curriculum has been adapted by 18 non-government organisations and schools in Hong Kong and Macau. Preschoolers who received the nine-month intervention have had their autism severity reduced by 45 per cent and cognitive abilities increased by 18 per cent.

In an experimental study adopting a pretest-posttest design, 6–12-year-old Chinese-speaking children with autism were taught to recognize, imitate and produce 20 different gestures by watching robot animations.

In a new theory-based intervention program, the social robots were tasked to teach research participants to appropriately express their emotions and needs verbally. The positive results of direct human-to-human interactions again suggested that RABI can improve the learning and behavioral outcomes of children with ASD.

It has been found that RABI closed the gap on gestural production skills between preschool-aged Chinese-speaking children with ASD and their peers who aren’t on the spectrum after two-weeks of intensive training. Findings solidified the positive learning outcomes of RABI in young children with ASD. More importantly, this study generated a new assessment tool in evaluating gestural learning outcomes in both typically- and atypically-developing children.

In the play-drama protocols, children act different characters and engaged in drama role-plays. Prompting and reinforcement are also provided. Through participating in a play-drama, children with autism can discover the implications of their play behaviors and the impact of their responses on others, motivating them to initiate joint attention with others and to understand how to respond to others’ joint attention behaviors.

Additionally, a play-drama intervention offers a structured approach to developing children’s symbolic understanding and the use of pretense, bridging the gap between children’s love of play and the lack of play demonstrated by children with autism.

Prof So is inviting schools from China and overseas to subscribe to the curriculum. English and Mandarin versions of RABI are currently available and terminologies are adjusted according to culture.