Michelle Allen from Torrens Primary School and Adam Porter from Hughes Primary School in the ACT have received the top awards at National Excellence in Teaching Awards (ASG NEiTA). 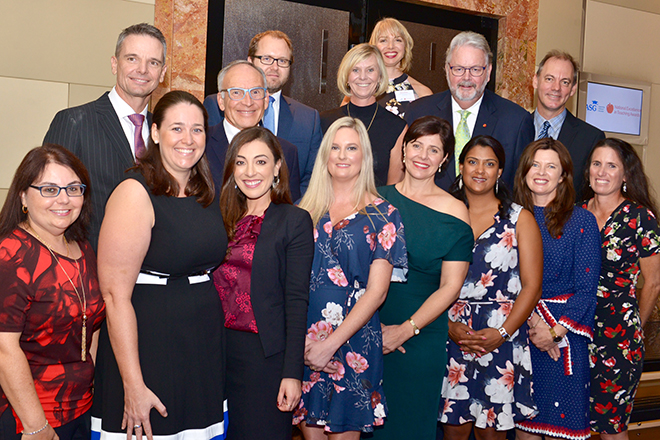 Michelle Allen from Torrens Primary School and Adam Porter from Hughes Primary School in the ACT have received the top awards at National Excellence in Teaching Awards (ASG NEiTA).

Selected from around 1450 nominations in 2017, the 12 national award recipients will be honoured for their inspiring and innovative contribution to teaching.

Michelle Allen teaches science and works with more than 100 international students as an English as an Additional Language/Dialect (EAL/D) teacher. She’s been described by a parent as having ‘boundless energy and enthusiasm’ and her science room is a ‘room of wonder’ filled with a chorus of ‘oohs and aahs’ from the children.

She also receives the International Space Camp Award and will spend one week at the US Space and Rocket Center in Alabama along with two ASG students in July this year.

Allen says ‘learning by doing’ is definitely her motto.

“In my classroom there are no standardised worksheets in sight, but there’s plenty of noise as students brainstorm, employ thinking skills to problem solve, perceive and share observations of pattern and outcomes, explain to peers what they’ve accomplished and that it takes to think through an idea. That idea may look like hands covered in a slime concoction, ducking marshmallows zipping across the room from catapults designed and built by the students or exploring phenomena outside."

She also has a specialist role at the school to help plan and resource quality science programs for the junior school and developed STEM kits for use across the whole school.

Parents are also invited to join science lessons as volunteers, to encourage their children’s learning and achievement.

Allen says they too have a hands-on learning experience.

“Their role goes far beyond setting up before and cleaning up after. Having been trained in questioning techniques to help guide and frame student thinking, and with a clear understanding of learning intentions, volunteers engage with students in the learning process and are an integral part of all sessions.

Adam Porter has been teaching early childhood education for 10 years after a career as a motoring journalist.

He decided to change lanes and teach young people after seeing the benefits of supporting his nephew who struggled to learn.

“I viewed the role of an early childhood teacher as being instrumental in the development of a child; socially, emotionally and academically.”

Porter was nominated by a parent who says many of the children have thrived and responded to his exemplary teaching skills.

“Both of our sons started their time at Hughes with Mr Porter being their kindergarten teacher. They both had him up on a pedestal and the motivation he provides for children to want to learn is evident by the way children respond. He sets high expectations for his students, which are both reasonable and achievable.”

He also co-ordinates the Kids’ Hope Program at Hughes Primary School, a mentoring program to support students across K-6 who require additional social and or emotional support.

“It’s a community based program that aligns a professionally trained mentor with a student who has been identified with social, emotional or academic difficulties. I ensure parents are involved in the process, and understand the key role the mentor plays in supporting their child, meeting for one hour each week. This has allowed students to gain confidence, resilience and self-belief, and be active members of their cohort. This not only assists in the school setting but also within the home environment.”

Adams says he’s also an advocate for male teachers within the profession.

“Male teachers are a rare commodity in the field of early childhood education, and working with a new male educator last year, I understood that my mentoring role, while providing essential advice and guidance, was also about collaboration between us.”