Berwick Primary has been buzzing since its Wakakirri team beat out 290 schools to win the primary section of the story dance competition with their show Jack and the Giants. 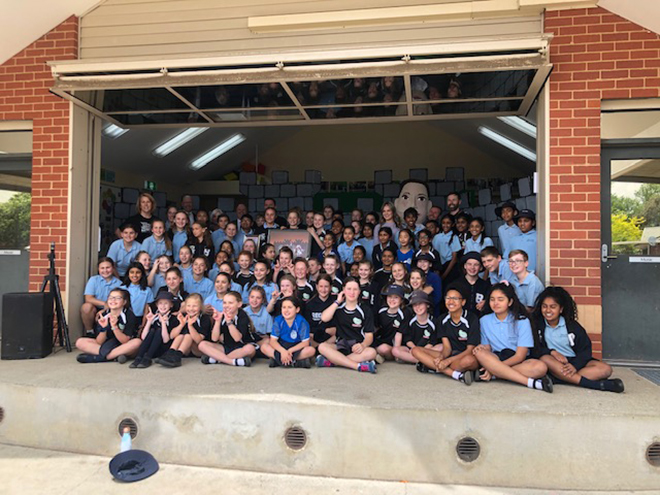 Berwick Primary has been buzzing since its Wakakirri team beat out 290 schools to win the primary section of the story dance competition with their show Jack and the Giants.

The win was made official this week with Adam Loxley Festival Director of Wakakirri presenting the team with their winner’s award at a special assembly. Obviously, the dancers were still energised by the whole experience, breaking into a spontaneous rendition of their story dance song and busting a few moves as they waited for the ceremony to begin.

Berwick Primary’s story-dance was a – more positive – reimagining of Jack and the Giant Beanstalk where children visited the giants’ realm, finding friends and connecting with family instead of making off with gold and a golden egg laying goose and eventually bringing about the giant’s demise.

Between the costumes, including the outsize heads worn by the actors playing giants, the extensive sets and the hours of rehearsal required to make it all come together, the production was a massive creative effort.

Winning is great, it’s a validation of all the time, trouble and creativity put into a story dance but there were many other valuable lessons learned, one being resilience.

There’s a reason actors tell each other to break a leg; if there is an activity that will test your ability to push through it is theatre and Berwick Primary received a thorough grounding in what it takes to make a theatrical production happen.

On performance night, the key set piece castle managed to collapse just minutes before the dancers were to go on stage. Rather than give up the crew members got to work and fixed the problem as best they could, the performance went ahead and the crew members showed themselves what they were capable of.

That was just one of the many gremlins that visited Berwick Primary’s show, the same gremlins that have been visiting theatre productions since the beginning of time. By overcoming them, the crew members learned the value of cohesion and developed an ability to deliver under pressure.

Those involved in the production found that working together is valuable, they made new friends, some leaders emerged and the benefit of discipline was reinforced. They also got to perform at Melbourne’s grand old lady of theatre, the Palais in St Kilda.

“I’ve been doing Wakakirri for 27 years now and I have seen some amazing national winners and Jack and the Giants is definitely up there with some of the best. It was an amazing theatrical production.

“Every Wakakirri performance starts with an idea, a spark and that idea is developed into a story and a framework is built around that story, you’ve got choreography, you’ve got sets, and costumes, you’re learning it really is a process,” Adam Loxley said.

“To go through that process and create something amazing is really special, you took that idea of Jack and the Giants as a team and turned it into something special and now you appreciate the effort that it took, and that experience that you’ve had, that knowledge, is something you can draw upon for the rest of your lives… it’s a little bit like a secret that you now know the answer to.”