A free pop-up installation of artefacts recovered from shipwrecks along the infamous Shipwreck Coast at the historic Rocket Shed building in Port Campbell is open all month. 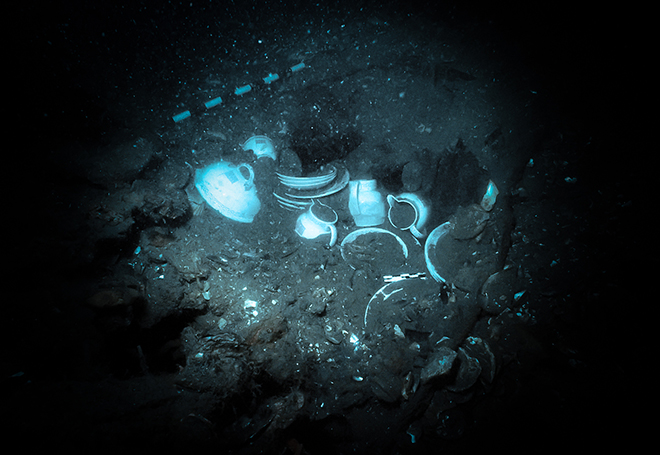 A free pop-up installation of artefacts recovered from shipwrecks along the infamous Shipwreck Coast at the historic Rocket Shed building in Port Campbell is open all month.

A partnership between Parks Victoria and Heritage Victoria, Below Decks: Rescued from Shipwrecks is hosted in a unique setting providing additional context and telling a story of yesteryear, prompting reflection on the area’s history. The installation showcases everyday objects recovered from seven shipwrecks including the Loch Ard, Fiji, Thistle, SS City of Launceston, Joanna, Sacramento, and City of Edinburgh.

Visitors can peer through the front window of the Rocket Shed, perched on the hill overlooking the Port Campbell Jetty, to view the artefacts from the Victorian State Historic and Maritime Archaeological Collection, which is unique in Australia and held by Heritage Victoria. No other state has its historical and maritime archaeological artefacts curated in one place.

The best known of the shipwrecks being showcased is the Loch Ard, built in Glasgow, Scotland and sporting two decks and three masts. On route to Melbourne from Gravesend, England in 1878 heavy fog made it hard to see the Cape Otway Lighthouse, causing it to run aground on the hidden reef of Mutton Bird Island. It was carrying 2375 tons of general cargo and 52 lives were lost, only two survived.

After the Loch Ard tragedy, the Rocket Shed was built to accommodate a rocket-and-mortar crew which were established to undertake life-saving rescues from other stricken ships along the treacherous coastline.

Many shipwrecks remain hidden along the coastline and in Victorian waters, and whilst they make great diving attractions, the artefacts are precious and should be left untouched.

Parks Victoria, Manager Heritage Partnerships, Paul Roser, said “The coastal environment along the Great Ocean Road, while beautiful, is treacherous. This installation reminds us of the force of nature to destroy, but also of its ability to protect – these artefacts have survived tragic events, and survived.”

“Parks Victoria is the custodian of more than 3,000 historic places across the state, and is responsible for protecting and sustainably managing these on behalf of the community. Our diverse historic sites are significant in telling the stories of Victoria’s history.”